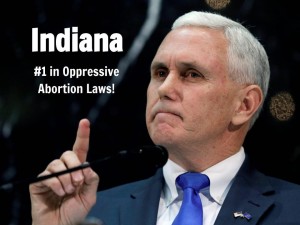 Give anti-abortion nutjobs credit–they’re always looking for new and innovative ways to invade uteri. And now the quest to deny reproductive rights has hit a new low in the flatlands of Indiana. Governor Mike Pence is about to sign an anti-
abortion mega-law  so extreme it has many anti-abortion zealots calling foul. And this is in the state that brought you the anti-gay “Religious Freedom Restoration Act.”

The recently passed Indiana HB 1337 is awaiting Governor Mike Pence’s signature. Given his actions during the controversy over the anti-gay legislation, odds are high that this ambitious conservative pander-monkey will soon be
ejaculating ink all over it.

As for the bill itself, first of all, it includes virtually the entire TRAP laws “Greatest Hits” including unreleased live cuts and alternate takes. It’s got the classic mandatory ultrasound, the 18-hour waiting period, the required admitting privileges, and even the ghastly requirement that women pay for the cremation or interment of the aborted fetus. And they managed to top that!

Beyond banning abortion for race or sex selection (which is non-existent anyway), this bill also prohibits abortion due to “a diagnosis or potential diagnosis of the fetus having Down syndrome or any other disability.” That’s right–the people whosay Obamacare comes between you and your doctor want to step between a woman and her doctor during the most heartbreaking and private decisions a woman can make. Oh, and the bill says that any doctor performing such an abortion can be sued for wrongful death.

Congratulations, Indiana, for adding new meaning to the word “invasive.” Unfortunately, another state is bound to take the anti-choice lunacy even lower in the near future. Stand with Lady Parts Justice League to stop this heartbreak in the heartland and elsewhere.