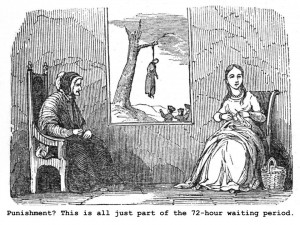 Conservatives love to scream bloody murder–quite literally–chanting outside of abortion clinics while waving gore-drenched posters of pureed fetuses. But when the the legal ramifications of calling a medical procedure “murder” are raised, abortion foes suddenly start singing a much different tune.

When recent statements about women, abortion, and punishment were bandied about all last week, anti-abortion groups were in a stampede to put distance between themselves and the consequences of their own “abortion is murder” mantra. Suddenly, the same people who were spitting bile at pregnant women outside of abortion clinics were rallying around “pro-woman” notions with hashtags like #lovethemboth.

Just how much they love the women whose lives they are invading is more obvious from their actions than from the crap they’re spewing about not punishing women. Here are the facts–in the stories of women who are most definitely being punished:

A Tennessee woman was charged with attempted first-degree murder when she attempted to self-abort with a coat hanger in her bathtub. A woman in Indiana  was charged with attempting an illegal self-abortion. A Pennsylvania woman was jailed for giving her daughter abortion pills. And in Alabama, “chemical endangerment” laws are being used to prosecute almost 500 women accused of endangering their fetuses.

And no matter how you twist it, denying women their constitutional rights with things like TRAP laws and mandatory waiting periods IS punishment. Don’t let yourself be punished–fight back with Lady Parts Justice League.