We can’t have abortion rights without doctors who know how to perform abortions right. 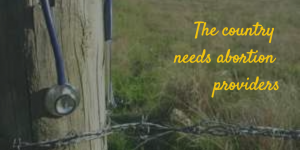 The story of training new abortion providers in the U.S. is a success story, but a success that needs to be expanded upon. Thanks to pioneering training programs, the number of new doctors trained in abortion procedures is rising. But because of vicious attacks on abortion rights in many states, not enough of those providers are in the rural Southern and Midwestern areas where abortion services are in the most jeopardy.

Although obstetric-gynecology residencies are required to offer abortion training, many of them don’t. Two privately funded training programs have picked up the slack, with remarkable results in recent years. Medical Students for Choice and the Kenneth J. Ryan Residency Training Program provide training in reproductive services and abortion to over 1,000 doctors and medical students each year.

Both programs were launched in the 1990s and have contributed enormously to keeping abortion available. The Kenneth J. Ryan Residency Training Program has contributed to training in reproductive services and abortion at 85 teaching hospitals. Medical Students for Choice has 185 chapters and provides training at its Abortion Training Institutes. And most of the trainees in both programs are women.

But most of those being trained are not ending up in the largely rural areas where the crusade against abortion rights is being most vigorously waged. TRAP laws and other repressive measures have decimated the number of abortion clinics in wide areas of the country, and newly trained ob-gyn practitioners are understandably reluctant to enter what amounts to a war zone.

Abortion doctors shouldn’t have to be heroes. We’ve managed to keep on training them despite the difficulties. Now let’s keep fighting to provide supportive environments everywhere their services are needed.