File This Under: “No one cares how you fucking feel.” 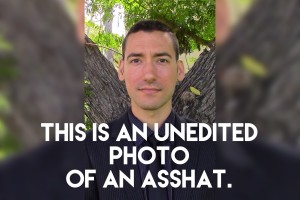 Good News!! David Daleiden, the flauteur who created the bullshit anti-Planned Parenthood videos for the Center for Medical Progress — (which engages in neither medicine, nor progress, and now that I think about it, isn’t even a Center) — has been court-ordered to hand over the names of his organization’s supporters and donors.

Since the release of these horribly deceptive videos, Five Women’s Reproductive Health centers have been attacked but he had the actual nads to beg the court not to make him release the names because he’s afraid of “retaliation.”

The Center for Irony and Hypocrisy is now open offering tissues for those male tears. #LPJLPlayOfTheDay