First, the rightwing politicians occupy your uterus. Then, they refuse to allow YOU access to it. And if, out of sheer desperation, you try to break in… they’ll charge you with a capital crime.

But enough with the metaphors, which can hardly do justice to this searing tale of injustice.

A Tennessee woman has been charged with first-degree attempted murder for allegedly trying to self-abort.  We don’t know what drove 31-year old Anna Yocca of Murfreesboro, Tennessee to her bathtub with a coat hanger, but if she wanted a safe, legal abortion, Tennessee is one of the many states that is trying to make abortion neither safe nor legal. Tennessee requires a 48 hour waiting period and “counseling” for women seeking abortion. And they have to seek pretty hard–96% of counties in TN don’t have abortion providers. Anna Yocca was evidently unable to find access to abortion care in the minefield/steeplechase/labyrinth of restrictive laws and regulations that Tennessee has laid out to obstruct women. 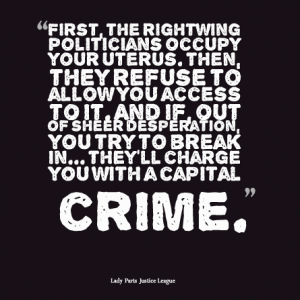 Coat hangers aren’t just a quaint symbol of a hypothetical situation that we are eons removed from. They loom as a very real and grim alternative for women trapped by draconian laws being put into play all over America today. And when despair drives women to risk their own lives in an attempt to exercise some control over their own lives, they end up being charged with murder. And all over a personal choice that is guaranteed to them by the US Constitution. Join with Lady Parts Justice and work to keep coat hangers in the closet.