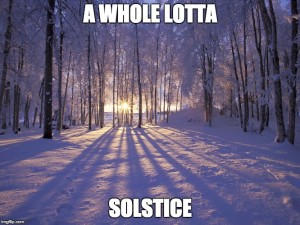 As we approach the holidays and reflect on the past year, LPJL realizes we have brought you some pretty dark realities about the erosion of abortion access. We thought it would be nice to take a look some of the brighter stories dawning around us at the beginning of a brand new year. Here are some very encouraging stories that will kick off your holidays with some reproductive tidings of comfort and joy. As we pass through the literal darkest time of the year (from our northern hemisphere-centric POV… sorry, Fiji), we'll head into 2016 with some positivity.

A District Court judge has ruled that the doctored videos being used by Republicans in their crusade to defund Planned Parenthood show absolutely no criminal activity, AND the judge ruled the videos could put providers at risk. That means that the people who use such videos to stoke violence against abortion providers could be held accountable… making the “Pro-Life” movement significantly less lethal to actual life.

In California, another federal judge has just upheld a law requiring “crisis pregnancy centers” to inform women that abortion is an option. Now, pregnant girls in California can’t be subjected to lies, shaming, and deliberate deception under the guise of “counselling.”

Finally, a new national poll shows that support for abortion rights is at it’s highest point in two years. In the past year alone, support for legal abortion has risen from 51 percent to 58 percent. And it rose despite a relentless rightwing propaganda campaign against abortion rights. It turns out it’s even harder fool the American public than it is to confuse frightened pregnant teenagers at crisis pregnancy centers.

It all shows that your support and hard work can make a difference. Thanks for a great year, and here’s to a brighter one to come!