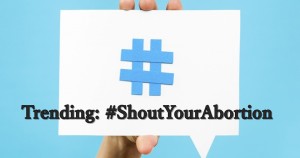 January 22nd 2016 is the 43rd anniversary of Roe V Wade, or as some conservatives call it, Holocaust Remembrance Day (yeah that’s a legit real thing people say). On Friday people are gathering in all fifty states, at house parties, bars and comedy shows, to celebrate Roe with an empowering event called ‘Shout You Abortion.’

‘Shout Your Abortion’ began as a Facebook post. On September 19th, in response to the congressional attacks on Planned Parenthood, Amelia Bonow posted on her page about the abortion she had a year prior at PP. Hoping to inspire other women to discuss their stories, take on the stigma of abortion and replace it with a dialogue that puts abortion in it’s proper place: on a list of medical decisions many people will make in their lifetime. Bonow’s friend, feminist badass Lindy West (@lindywest) took to Twitter with the hashtag #ShoutYourAbotion. People shared their experiences and supported each other; it was an incredible momentum builder towards busting apart abortion stigma. Of course trolls lost their already lost minds but Amelia and Linda didn’t back down! They are not sorry! They are not whispering! The movement went viral. BRAVA you wonderful humans!

One in three women will have an abortion in her lifetime. Equality should mean you NEVER have to shout your abortion unless you feel like it. The irony here is that the way we'll achieve privacy for all is for as many of us as possible to shout our stories.

If you feel you can be a voice for yourself or for someone who needs encouragement, join us on January 22nd to  #ShoutYourAbortion! It’s scary out there, now is not the time to use your inside voice.