Abortion Access Front is outraged by the crammed-through confirmation of Amy Coney Barrett to the Supreme Court. Her terrifying judicial overreach and lack of transparency are only matched by her virulent beliefs, all which should have disqualified her from a lifetime appointment from the get-go.

Outraged along with millions of Americans who stand to lose access to reproductive rights, LGBTQ rights, immigrant rights, and voting rights, because Barrett’s “originalist” interpretation of the Constitution is an extremist judicial philosophy now held by a solid majority on the court, and far too often leads to rulings that strip away the basic civil rights of the most marginalized Americans.

We have A LOT of outrage.

But we reserve the biggest steaming pile of outrage for the senators who forced this Scaliatrix onto the court eight days before our presidential election, against the dying wishes of Justice Ruth Bader Ginsburg.

It is so effing obvious that Senate supporters of Barrett rushed her through because it is very likely that on election day, we, the American people, will show them that we don’t share the 18th century values of this president, these senators, and of this nominee.

AAF founder Lizz Winstead sums it up: “When somebody interprets the law for the sole purpose of furthering white supremacy and destroying the lives of vulnerable people, that doesn’t make them a great legal mind, that makes them a monster.”

And to the superspreader enablers (looking at you, DiFi) who gave this absurd process legitimacy, and the uterus underminers who voted for her (looking at you, Lisa Murkowski) may a mandatory government “probe” be in your future.

Yes, our outrage is legion. But so is our resolve.

Now more than ever, Abortion Access Front needs every pissed-off American to join us as we continue this fight for our lives. We need to double our efforts at shutting down the lies with facts (and extremely rude jokes) and need everyone to stand with us to expose those in power who wish to legislate the seats we have earned at the table right out from under us.

A 6-3 conservative majority on the Court means even more work in local communities, defending clinics, destigmatizing abortion, and helping to normalize reproductive care. AAF is uniquely positioned to assist independent clinics in areas that are all too easily overlooked, whether it’s connecting them with support networks in their own towns, or just helping with much-needed landscaping work to create barriers to protect patients from anti-abortion zealot protesters.

We also must work even harder now to keep scary-ass rights-stomping misogynists from getting elected at the state and local levels, as they are the ones who pass scary-ass laws that end up becoming Supreme Court cases. Amy Coney Barrett reminded us many times during her confirmation hearing that SCOTUS justices don’t just wake up one day and decide to ban abortion or marriage equality. A lower court case must wind its way to them and end up on their doorstep.

To those who have been in the fight the whole time, we see you, and we will stay here fighting with you. And to those who have stayed on the sidelines, thinking the Supreme Court doesn’t affect you, we ask you now to GET IN THE FIGHT. IT’S YOUR FIGHT! 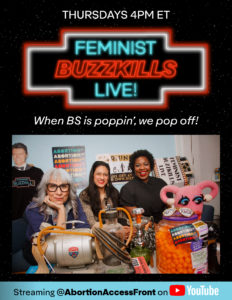