…so blows the nation. And right now, Ohio really blows! 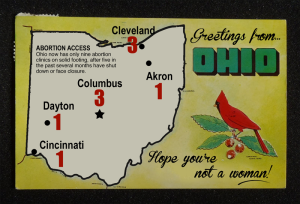 A full-out, multi-pronged assault on reproductive rights is currently underway in Ohio. Three separate bills  to essentially outlaw abortion are currently being pushed in the Buckeye State.

The proposed legislation would ban abortion after 20 weeks, outlaw abortions to avoid having a baby with Down Syndrome, and–of course–defund Planned Parenthood. Taken together, anti-choice activists are not just in your uterus, they’re busy renovating it for their own purposes.

And there’s a fetid cherry on top of this triple scoop of poop! Since 2010, various anti-choice scams have already managed to shut down 8 clinics, leaving only 9 facilities operating in a state with a population of over 11 million. And now the only thing preventing closure of the last 2 clinics in the Cincinnati area is an injunction from a federal judge.

Share this to let people know about the rapid erosion of reproductive rights in Ohio–don’t let anti-abortion lunatics put the “Uck!” in “Buckeye.”