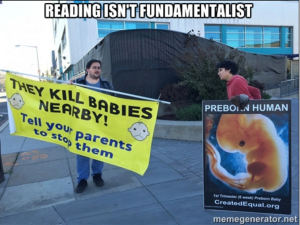 “Mommy, why is that weird man waving pictures of body parts?” Well, baby girl, in their war to save unborn children, anti-abortion lunatics are treating real born children as collateral damage.

Officials at Two Rivers Public Charter School in Washington, DC are suing anti-abortion protesters for harassing students as the protesters try to prevent a Planned Parenthood facility from opening next door.

If anti-choice zealots were trying to illustrate the notion of “love the fetus, hate the child,” they could hardly do better than the hellish scenes of psychological child abuse described in the lawsuit. Children as young as 3 are exposed to ghoulish images of aborted fetuses and signs about the planned “Murder Facility.” The protesters tell students “they kill kids next door” and warn them of the “bloodbath that’s coming.” Now run along kiddies.
The school wants to be clear that they are not taking a stand on the issue of abortion. But they feel compelled to take a stand on the issue of psychos terrorizing their kids. The lawsuit names several individual protesters, including one who did prison time for plotting to bomb an abortion clinic. Great! Maybe they’ll be available to talk on Career Day.