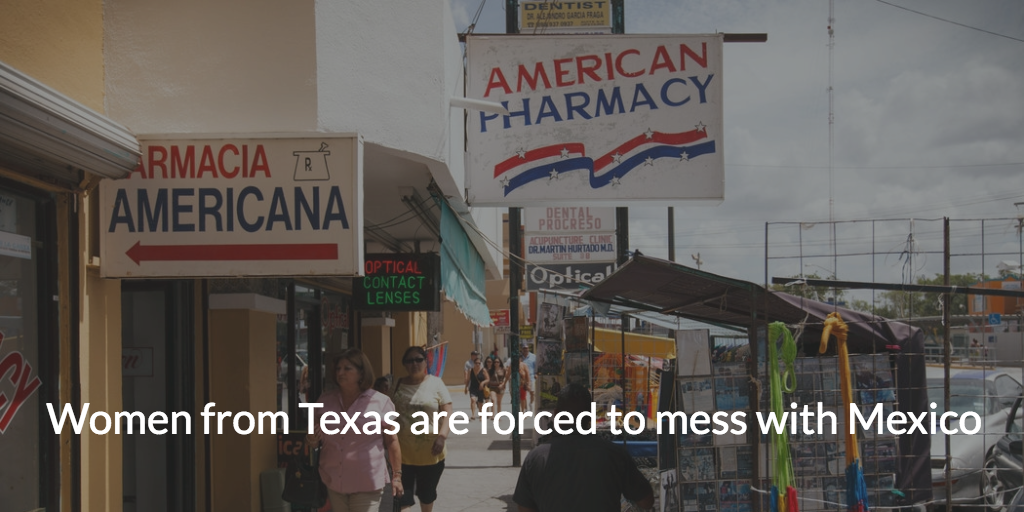 Conservatives are constantly having meltdowns about securing the border with Mexico. Yet their own anti-woman policies in Texas are driving massively increased traffic across that border–by forcing desperate Texas women to go to Mexico to find affordable, if not quite safe, medical abortion pills.

NPR recently reported that Mexican pharmacies in border areas are being inundated with American women seeking cheap misoprostol, which is one of a 2-drug FDA-approved procedure for performing medical abortions. This home-remedy version of a medical abortion is less safe and less effective than the procedure which is technically available to women in Texas. And women who are forced to buy misoprostol in Mexico are left without proper professional medical advice and care.

So why do they do it? Because Texas is a Texas-sized sinkhole for women’s rights and common sense. First of all, the TRAP laws passed in 2013 require impossible standards that have forced half the clinics in Texas to close. And then the law requires, completely unnecessarily, that the pills be taken during a clinic visit!

Other abortion regulations in Texas require women to have three separate appointments to obtain an abortion. And she must see the same doctor every time. Furthermore, the woman has to have an ultrasound while the doctor is forced to describe the fetus to her.

Beyond that, the very fact that Medicaid and other public monies cannot go toward abortion care mean that an abortion in Texas costs about $500–in some of the poorest sections of America. But misoprostol can be bought for $50 in Mexico.

Small wonder that many women–especially poor and working women–prefer to take a trip to a border town and take matters into their own hands.

The irony is that abortion is–theoretically–legal in the U.S. In fact, a woman’s right to choose is theoretically a Constitutional right. And abortion is illegal throughout Mexico, where misoprostol is sold only as an ulcer treatment. But the practical reality in states like Texas is that harsh anti-abortion measures actually force American women to travel to Mexico.

It’s a reminder that no matter which way the Supreme Court decision on the anti-abortion TRAP laws in Texas goes in Whole Woman’s Health vs Hellerstedt, women’s health and safety are going to be compromised as long as other restrictions such as waiting periods, forced ultrasounds, and bans on public money for abortion services are still in place.