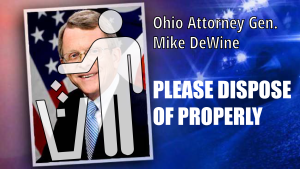 Anti-abortion lunatics love to take a routine practice and make it seem like some kind of ghoulish sacrament when applied to abortion. They did it when they described the conventional practice of donating fetal tissue as “selling baby parts.” They do it when they refer to any abortion performed after the first trimester as “partial birth.” And now they’re doing it again with Trash Laws.

We’ve discussed TRAP laws before which cover the broad spectrum of unnecessary laws and regulations designed to force abortion clinics to close. Trash Laws specifically complicate the disposal of fetal tissue as a way of making it impossible to perform abortions.

For example, a bill that is right now working its way through the Indiana legislature would mandate that all fetal tissue remains be either cremated or interred. So if the uninsured cost of your medical procedure doesn’t break you, maybe the cost of the funeral and burial for a dollop of tissue will do the trick. I’m sure you could get Rick Santorum to deliver a very stirring eulogy for a reasonable fee.

In Ohio, a proposed bill would require women to designate “burial or cremation of fetal remains,” with the costs passed on to the clinics, vastly increasing the expense of abortion services. Ohio State Rep. Robert McColley isn’t sure “whether there would be specific cemeteries for the bodies or places where cremains could be spread.” But wouldn’t it be nice to have picnics in the cemetery where your former fetus is spending eternity?

And what would an anti-abortion assault be without fear-mongering? Cue Indiana Right to Life CEO Mike Fichter, who said, “We fear Indiana’s current law allowing aborted babies to be treated as medical waste is making Indiana a magnet for fetal disposal.” For the record, there is no evidence that the Hoosier State is being inundated with aborted fetuses. You can still visit Muncie without being knee-deep in medical gore.

It’s all part of the long term right wing plan to make abortion more difficult and to humanize fetal tissue as part of their “personhood” push. And if we let them get away with it, they’ll end up dancing on the grave of reproductive rights.