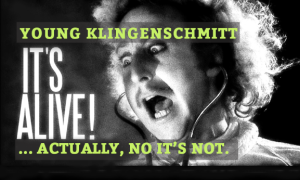 What are they smoking in Colorado? Evidently they need more of it. Anti-abortion zealot, legislator/embarrassment, and notorious fountain of flap-dappery, Colorado state Rep. Gordon Klingenschmitt is calling Colorado health officials “science deniers” for correctly reporting that IUD’s are reducing the number of abortions in the state.  And when conservatives start talking science, you can be pretty sure there isn’t going to be a lot of interest from the Nobel Prize Committee.

The Colorado Department of Public Health and Environment reported that a program to provide free or more affordable IUD’s and other long-acting contraceptives to teenagers and low-income women has reduced teen birth and abortion rates by almost half. And that’s great news, unless you think that fertilized eggs are full-fledged people who should be able to vote, drive, and serve on juries. So of course, Colorado Republicans applauded the success of the IUD program by defunding it. And good ole’ Gordo led the charge.

Rep. Klingenschmitt said “Although CDPHE’s science-deniers try to spin this increase in early-term as a decline in late-term surgical abortions, they are killing children nonetheless, just sooner, and with your money.” So to prevent any fertilized eggs from being inconvenienced, Klingenschmitt is willing to force Colorado teens to have actual abortions or actual babies.

Help LPJL correct this unscientific injustice! In the meantime, conservative “scientists” need to stick to searching for the remains of Noah’s Ark in all those melting glaciers that they say aren’t melting.