Framing Device! The State of OHIO is joining the growing list of states that want to set women and abortion providers up for a murder rap! It’s a fucking potential DEATH SENTENCE—not just for abortion rights, but literally for anyone who has an abortion or performs one.

Did You Know About This Scary Thing To Worry About If You Miss Your Period?

Why Are Women’s Issues Only Trendy When There’s Beautifully Lit Rape Scenes Involved?

Once you learn to accept your body, you have to stop other people from fucking with it! That first started with an ass-kicking 1970 book called Our Bodies, Ourselves and continues today with the The Handmaid’s Tale. Here’s a great look at where we’ve been and where we’re going.

You Think You’ve Read Every Angle on Hurricane Devastation, But Access to Abortion Is Also a Crisis for Many People. Amy Hegstrom Miller Stepped Up!

The HER in Hurricane Relief! Nothing beats our own Amy Hagstrom Miller, founder and CEO of Whole Woman’s Health—not bullshit laws she fights all the way to the Supreme Court, and not even the devastation of Hurricane Harvey. Read how Amy is getting free abortion care to Harvey’s victims.

For Shame! Some self-righteous pricks in Colorado are putting up billboards trying to shame the SHERO clinic workers who provide abortion care for those who are victimized and harassed by the same fucks who put up these billboards!

“I called and asked if they provide abortions and the woman on the phone said no. They also do NOT provide abortion referrals, meaning they will not even tell you where you can get one. Which is odd because their website says that “Our goal is to discuss the facts about abortion” and the woman on the phone told me that they would tell you the type of abortion you would need after they did the ultrasound to find out how far along you are.”

Read the rest of Molly’s review here, and don’t forget to UPVOTE! If you think that it’s creepy and wrong to blatantly lie to pregnant people, DO SOMETHING ABOUT IT, and #ExposeFakeClinics 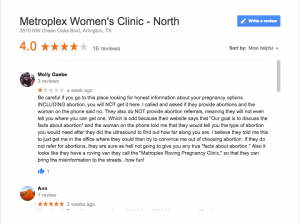