In our new Play of the Day series “Sauron’s Army” Lady Parts Justice League explores the key players Donald Trump has chosen to surround himself with: his advisors and the people being appointed to his cabinet, all of whom have a deep of history of being strongly anti-choice. 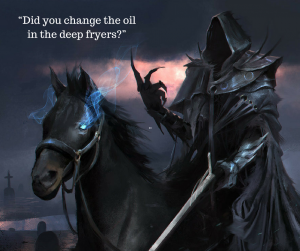 Donald Trump’s prick, er pick, for Labor Secretary is fast food kingpin Andy Puzder. Good ol’ Andy promises to be a real pain to workers AND especially to women. He’s spent his career trying to keep both down, including working directly to overturn Roe v Wade.

The Puz’s opposition to a decent minimum wage and to overtime pay is legendary. He famously extolled the virtues of machines over human employees by saying  “They're always polite, they always upsell, they never take a vacation, they never show up late, there's never a slip-and-fall, or an age, sex, or race discrimination case.” 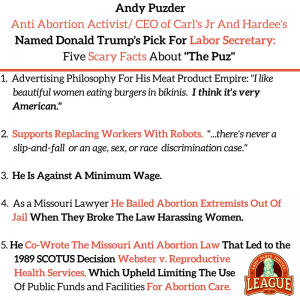 But he doesn’t just have his greasy, fingers in your paycheck— before he was fighting to keep wages at obscene levels, he was also a lawyer for anti-abortion extremists who were often thrown in jail for harassing women. In fact, Puz loved defending women haters SO MUCH, back in 1989, he helped write Webster v. Reproductive Health Services, the restrictive Missouri abortion law that imposed restrictions on the use of state funds, facilities, and employees in performing, assisting with, or counseling on abortion (which was upheld by the Supreme Court.) That law is part of a long-term strategy to undermine Roe v. Wade, as Puzder boasted 27 years ago.  “It is designed to make the Supreme Court face the question of deciding whether a state can decide when life exists.”

Now, thanks to Trump, this pink slime pusher will be in a perfect position to keep women even more vulnerable by promoting draconian wage laws while influencing draconian abortion legislation, creating even more obstacles to economic freedom for poor women and women of color.