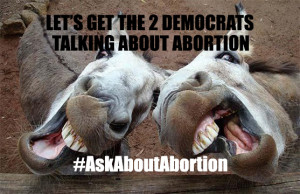 There are places and times when you probably shouldn’t talk about abortion — kindergarten graduation parties, when ordering takeout food over the phone, or while you’re painting Carly Fiorina’s nails. OK, maybe that last one is the perfect opportunity to make a few points about abortion rights.

But one time and place when people should definitely be talking about abortion is the Democratic presidential debates. Yet none of the Democratic debates so far has featured a peep about a subject that people are screaming about daily all over the country.

Tonight’s Democratic debate from Milwaukee, WI on PBS is a chance to change that. With Gwen Ifill and Judy Woodruff running things, it will be the first time this election will have an all-female panel of moderators. NARAL has sent a letter to Ifill and Woodruff to ask Hillary Clinton and Bernie Sanders pointed questions.

A hashtag has been set up to highlight the issue #AskAboutAbortion

Both Democratic candidates back abortion rights, funding for Planned Parenthood, and the repeal of the Hyde Amendment which prohibits federal funding for abortion, we know that.

But, THE MOST IMPORTANT ABORTION CASE IN 24 YEARS is being heard by Supreme Court in less than 3 weeks and no one is talking about that either!
Both candidates need to be pinned down on exactly how they would prioritize reproductive rights issues if elected. Voters need to know not only where their candidates stand, but what they’re willing to do to safeguard reproductive freedom, how they will not only stop this erosion of rights, but how they plan to restore and EXPAND abortion access. Let’s all push for more discussion of abortion rights at the debates — don’t let Democrats keep their TRAPs shut.