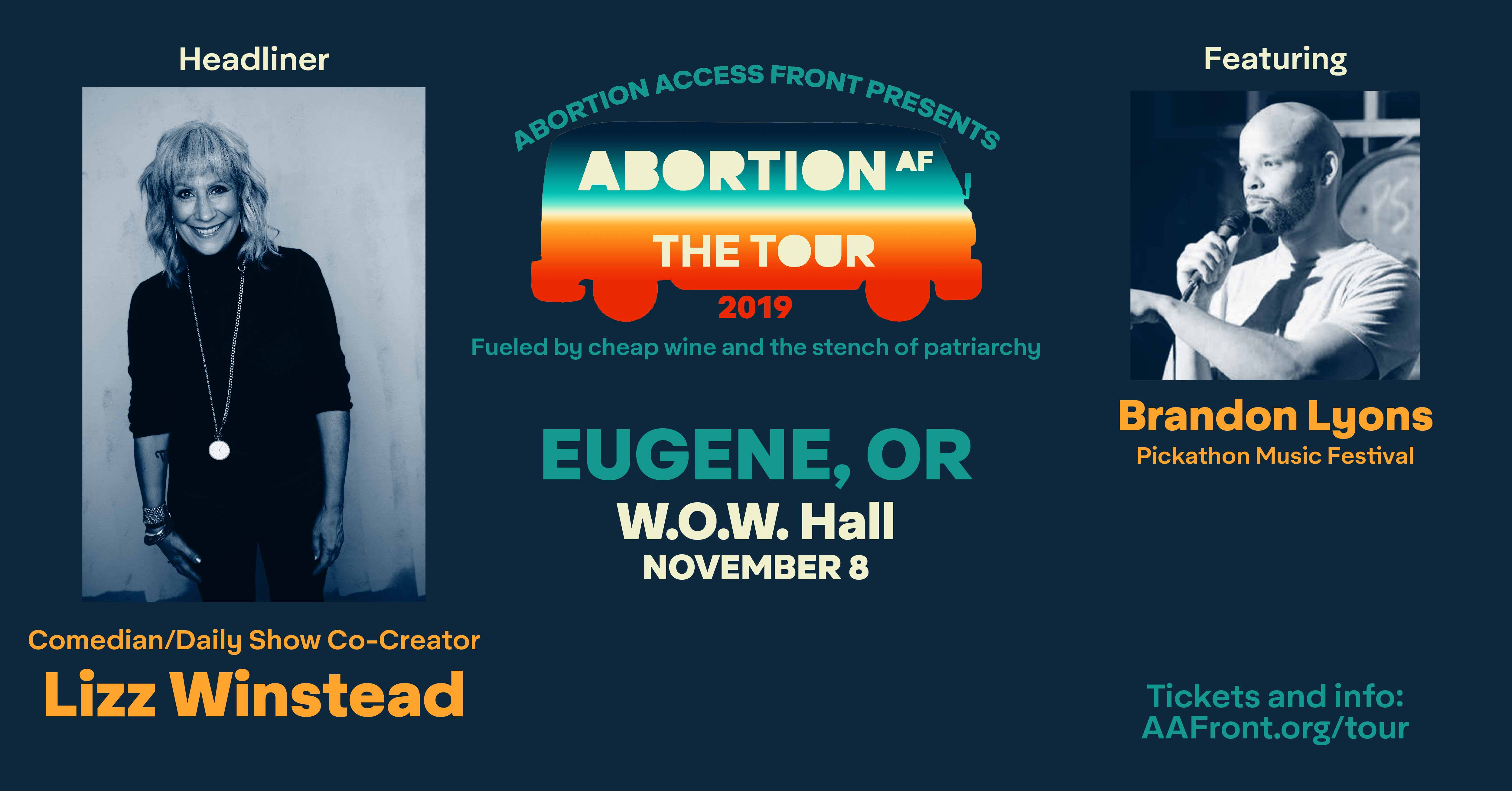 Abortion AF: The Tour in Eugene, OR!

We know you have THE MOST awesome state for reproductive rights, but, we also know you are fed up with the outrageous abortion bans being passed across the country. So, are you ready to laugh at all the misogynists making these laws and willing to take action to fight back? If so, then this is the show for you! Abortion Access Front (AAF), is a reproductive rights non-profit founded by Daily Show Co-creator Lizz Winstead and she and AAF are bringing local comedian Brandon Lyons, who has appeared at the Pickathon Music Festival and has also opened for Nicole Byer, Chad Daniels, and Ted Alexandro, and activists to WOW, Friday November 8th on their Abortion AF: The Tour.

Lizz delivers a take-no-prisoners show that will cover everything from Immigration to Impeachment and Brexit to Birth Control. If it’s in the news, Winstead will bring it to the stage as only she can. Known as one of the top political comedians in the country, in this roller coaster of a world, She brings her hilarious clarity to help us make sense of it all!

Winstead and company use comedy shows as a way to gather folks together for a night of fun, with activism components built right into the evening! Each performance features a post-show talkback with local abortion providers and activists, plus a booth full of direct action items. Abortion AF: The Tour is a one stop hub for audiences to have a great night out, take action, and get information on how to continue the fight back against the reproductive assaults across America and in your state.

Winstead states, “Being able to create an environment of joy that gives a platform for local activists to raise awareness to our fanbase about how they can combat these oppressive laws is what AAF is all about. Add to that, spending a few days in each town, bringing love and self care to clinic staff and we have a new brand of activism that has given me a whole new way of using my comedy to make change.”

We can’t wait to see you Eugene!

ABOUT AAF
Founded in 2015 under the name Lady Parts Justice League, Abortion Access Front is a team of comedians, writers, and producers that uses humor to destigmatize abortion and expose the extremist anti-choice forces working to destroy access to reproductive rights in all 50 states.

We do the job that the media doesn’t, creating provocative and hilarious videos and social media content that educates people about the pervasive, discriminatory abortion laws that profoundly and disproportionately impact the poor and people of color. Another crucial part of AAF’s mission is to support and raise awareness about independent abortion providers. These clinics bear the brunt of anti-abortion legislation and harassment.

We also spend our time out on the road.

Abortion AF: The Tour is a year round comedy and music tour that borrows from a USO format- bringing entertainment, elbow grease, and love to abortion providers and their communities. AAF creates a fresh space for people to take action who haven’t necessarily seen a place for themselves before in political or reproductive rights movements.

We foster a multicultural, multi-ethnic, gender fluid team of creative activists who understand how important and rewarding it is to create content that comes from and speaks to a diversity of life experience.

Today is the anniversary of Dr. Tiller's murder. W

Abortion docs have always been essential. They wil

Dr. George Tiller was an abortion doctor who was m