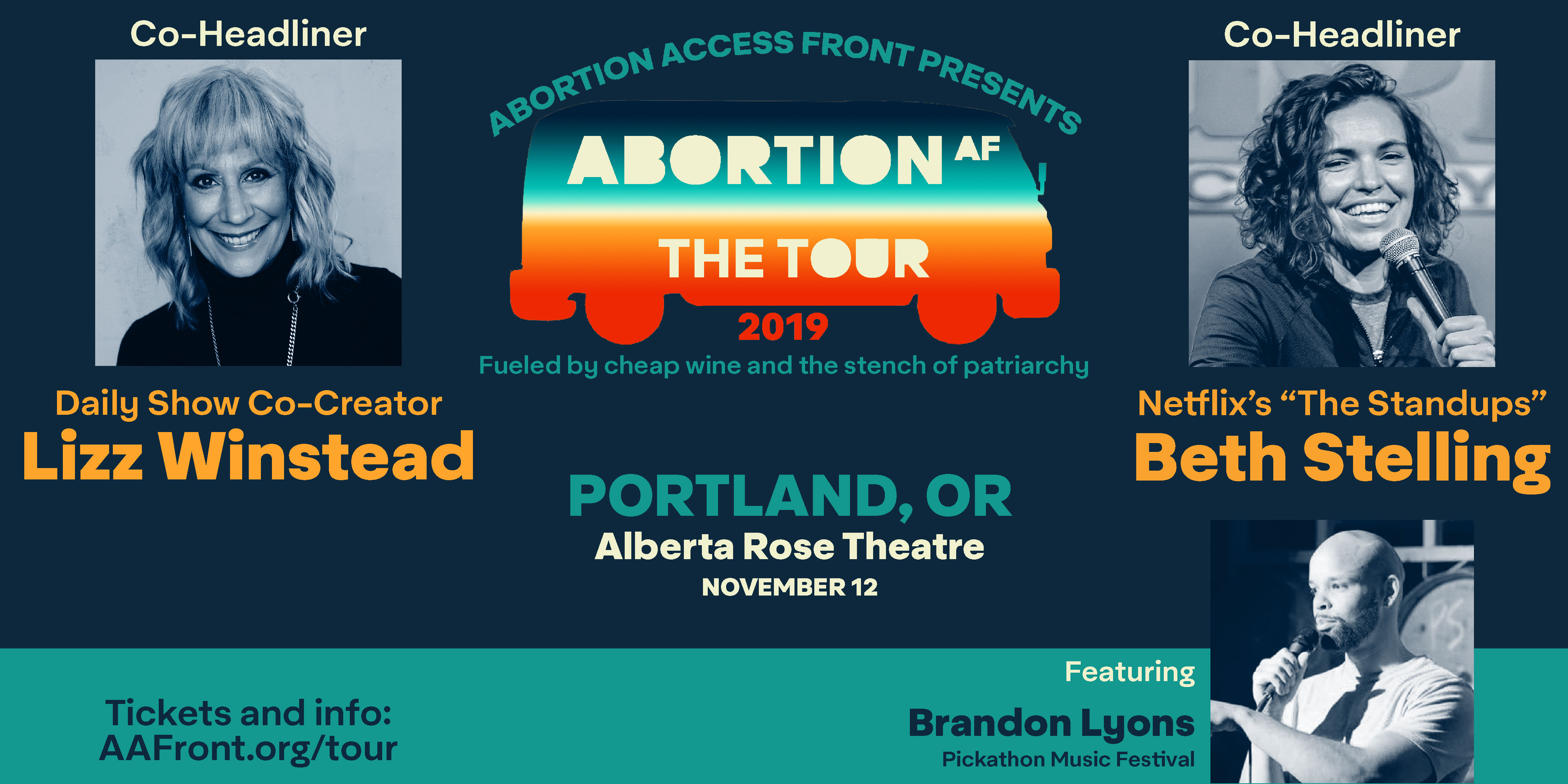 Abortion AF: The Tour in Portland, OR!

We know you have THE MOST awesome state for reproductive rights, but, we also know you are fed up with the outrageous abortion bans being passed across the country. So, are you ready to laugh at all the misogynists making these laws and are willing to take action to fight back? If so, then this is the show for you! Abortion Access Front (AAF), is a reproductive rights non-profit founded by Daily Show co-creator Lizz Winstead and she and AAF are bringing the incredible Beth Stelling, local favorite Brandon Lyons, and activists to The Alberta Rose, November 12th on their Abortion AF: The Tour.

Winstead delivers a take-no-prisoners show that will cover everything from Immigration to Impeachment and Brexit to Birth Control. If it’s in the news, Winstead will bring it to the stage as only she can. Known as one of the top political comedians in the country, in this roller coaster of a world, She brings her hilarious clarity to help us make sense of it all!

Beth Stelling joins Winstead to co-headline in Portland. Stelling hilariously masters combining the personal and political. Whether she’s talking about her tilted uterus or tackling TSA’s patriarchy, Stelling brings a razor sharp wit to her comedic storytelling as witnessed on Netflix’s “The Standups” and Jimmy Kimmel Live.

Opening that night is Portland’s own Brandon Lyons who has appeared at the Pickathon Music Festival and has also opened for Nicole Byer, Chad Daniels, and Ted Alexandro.

Winstead and company use comedy shows as a way to gather folks together for a night of fun, with activism components built right into the evening! Each performance features a post-show talkback with local abortion providers and activists, plus a booth full of direct action items. Abortion AF: The Tour is a one stop hub for audiences to have a great night out, take action, and get information on how to continue the fight back against the reproductive assaults across America and in your state.

We can’t wait to see you again!

AAF’s mission will continue that of LPJL: creating edgy, hilarious media and comedy, music and variety shows that destigmatize abortion and engage audiences to take action to fight laws restricting abortion access. The group will also grow their work providing on-the-ground support to independent abortion providers and their communities across the country.

Remember at the beginning of this how anti-abortio

1,300 maskless anti-abortion lunatics in a #COVID

Has anyone been seeing this ad campaign on the sub