Get Out of My Face! 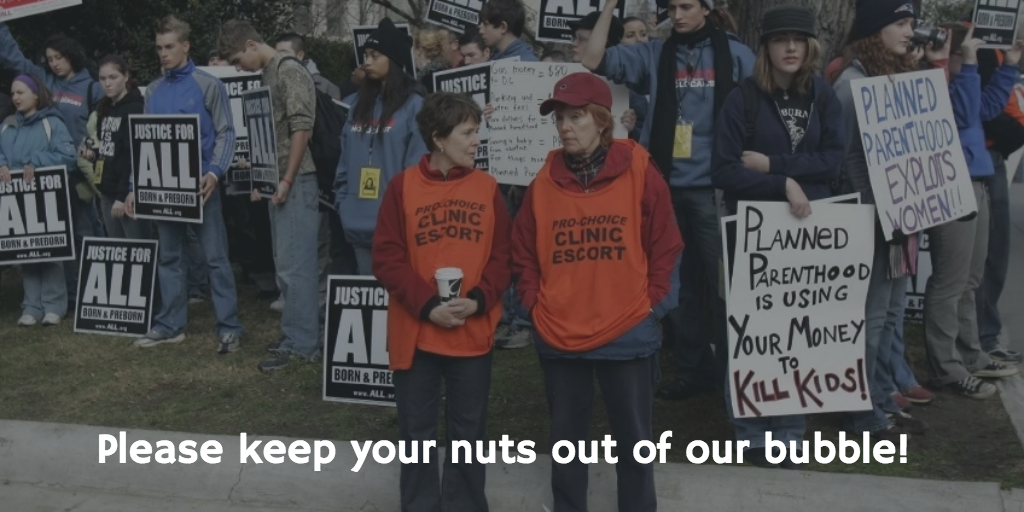 Anti-abortion crazies love to get up in your face, especially if you’re a woman trying to get an abortion.

So-called pro-life creeps are trying to overturn a Chicago ordinance that says protesters must stay eight feet away from people entering a clinic. Eight feet isn’t very much when a red-faced nutjob is screaming threats at you. But it’s too much for the red-faced nutjobs.

So-called “Bubble Zone” rules are in place in many cities in response to bombings, shootings, and attacks at clinics. The Supreme Court has already upheld a Colorado law that was almost identical to the Chicago law that’s being challenged.

Even with the laws in effect, anti-abortion extremists threaten, intimidate, and stalk women trying to exercise their Constitutional rights. In Chicago they even wear outfits similar to the vests used by clinic escorts, complete with look-alike Planned Parenthood logos! ENOUGH! The “pro-life” people call these thugs “sidewalk counselors.”

Clinic escorts are ROCK STARS–and they need all the help they can get as they help patients. Support the City of Chicago in their fight to keep the protective bubble zones intact.

Tell the the anti-choice mob that we don’t want crazies in our face any more than we want them in our uterus.