Keep Veggies out of the Classroom! 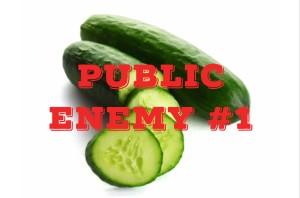 We often tell young children “you can be whatever you want to be when you grow up,” “live your dreams,” “you’re the best,”, blah blah blah. Super inspiring stuff. Words to live by, even. SPOILER ALERT: But not in Mississippi.

As part of an English class career presentation at Starkville High School, one Honor student expressed her desire to become a sexologist. Fascinating career choice, I can totally relate. Because that’s also what I wanna be when I grow up. It has always been a dream of mine to get a tenure-track job educating America’s youth about butt plugs (NSFW).

So what’s the problem? Sounds like she did everything right. She did some excellent research on what a sexologist does. She presented a cucumber, and then demonstrated proper application of a condom. End.Of.Lesson. She didn’t do a donkey show to “Truffle Butter” in a gimp suit. BUT I GUESS IN MISSISSIPPI , ASPIRING TO BE FACTUAL ABOUT SEX IS FROWNED UPON, AND IF YOU ENCOURAGE IT, YOU GET SUSPENDED . YEP, HER TEACHER Sheree Ferguson, a popular & beloved teacher at the school was put on administrative leave for allowing a student to present a valuable lesson.

Her suspension occurred because condom demonstrations in classrooms are against the law in Mississippi. Most school districts in Mississippi have as strict abstinence only curriculum, or teach a similar program called “abstinence-plus.” Due to a lack of comprehensive sex education, their teen pregnancy and STD rates are the highest in the nation. They’re really slaying the game there.

Dozens of students protested her suspension, and the family of the student created a change.org petition demanding her return to the classroom.

Not to point cucumbers at anyone, but Mississippi seems like it could surely use some tips from a future sexologist.