We worked for hour on this to make sure we got it right.

We wanted to show you that these “pro-lifers” are anything but.

FIRST: We created a shell organization that sounds like it could be in their movement.

SECOND: We gave it a Tumblr and posted this photo of one of our investigatrix countering the pro-choice activists. 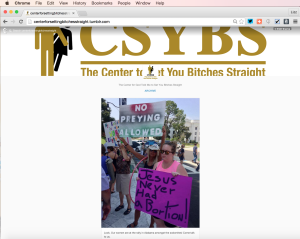 THIRD: We created a Twitter account because we knew the level of scrutiny we would be subjected to if we wanted to gain access. We needed to seem legit. 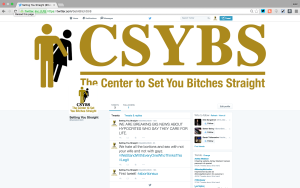 With our infrastructure in place, we were set. We headed to downtown Montgomery, AL with hiddenish video cameras and infiltrated the rally held by Abolish Human Abortion and Operation Save America, two of the premiere fetus defense groups in the anti-abortion movement.

What you will see next will shock you. They claim they live moral lives, in accordance to the bible. Just look on the AHA website, it clearly states, “Central to our work is the gospel of Jesus Christ” but when you see the way we have captured their words, you will be outraged at their hypocrisy.

This man claims to be a follower of Christ, but listen to who he really worships when his guard is down…

This man calls himself a “Christian Doctor,” but really…

And this is how one of their flock understands science…

Now to those who say, “Hey, that footage is edited,” Congratulations, you are a genius!

We have provided links to the unedited materials to show you that no matter what order the words come out of their mouths, the message is still one of dangerous ignorance. And that ignorance is influential. So influential in fact, that when similar anti-choice zealots decided to go after Planned Parenthood with ridiculously edited videos – they received responses that legitimized their fuckery. Republicans in congress as well as the Governors of Louisiana and Texas are calling for an investigation- not into a company that formed a sham tax-exempt bio-medical firm, nope, but against Planned Parenthood.

The people in these videos are the same brand of anti choice zealots as the assholes screwing with Planned Parenthood. We wanted to turn the tables on the ridiculous nature of this hit job by doing one of our own.

Share this post to expose the kind of tactics these people are using to destroy access to abortion care. Don't let them get away with it!

Fight back and support!

If you want more videos from the Lady Part Justice Investigatin’ Unit, that expose the truth about the frauds and hypocrites fighting against the reproductive justice movement, please support our tireless dedication to the truth and donate here.

P.S. A second piece of heavily edited anti-Planned Parenthood bullshit video was released yesterday, and apparently there's more to come. Some good news is the Lady Parts Justice League has hours of footage of the other side's anti-birth control, slut-shaming, moronic adaptations of how babies are made, so that every time they release a video, we will too!

Cheers y'all. Stick up for abortion providers. They save lives.