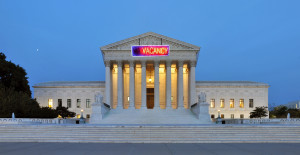 In the immediate aftermath of the death of Supreme Court Justice Antonin Scalia, the very first thing to happen was Mitch McConnell announcing that America must grind to a halt until there is a Republican in the White House or they can find a way to reanimate Scalia’s corpse.

But almost as quickly, there was a predictable outpouring of relief from progressives along the familiar lines of the Wizard of Oz “Ding dong…” meme. That of course was shortsighted and wrong — a person’s death is never a reason to celebrate… especially when that death doesn’t really alter the immediate status quo. And if McConnell succeeds in his plan to halt the forward march of time, a Supreme Court without Scalia is the very epitome of gridlocked status quo.

Until a replacement is on the bench, the polarized SCOTUS will undoubtedly divide 4-4 on any hot button issue, and as we know, there are no hotter buttons than the ones attached to Lady Parts. In the event of a tie in a Supreme Court decision, the lower court ruling stands. And the lower court ruling on the biggest abortion rights case currently before the court is a real turd pie.

The case of Whole Woman’s Health v. Hellerstedt is about the restrictive TRAP laws that the state of Texas has imposed to squeeze abortion clinics out of business. The conservative 5th Circuit Court ruled that Texas is free to treat women who need an abortion like meth heads who are trying to knock over a liquor store to get money for a fix — a scenario that is only slightly more regulated in Texas than an underage rape victim trying to get an abortion.

A Supreme Court without Justice Antonin Scalia will have much less colorful opinions (you won’t hear Chief Justice John Roberts use terms like “higgledy piggledy” or “jiggery pokery.”) But it won’t be any closer to ensuring reproductive rights are respected until a suitable replacement is named and approved. So don’t go celebrating a person’s demise… when you should be actively working to make the most of the world they’ve left behind.