The War of the Uteri

Choice means YOUR choice! This great Buzzfeed article from Australia explores the nightmare world of reproductive coercion—when someone else is controlling if and when you get pregnant or have a child. And that someone else can be anyone from a rapist to your elected representatives. Often it’s a partner—and if they’re using force to control your reproductive choices that makes them by definition an abusive partner. Women who are caught up in that cycle need help to escape it—whether that means guaranteeing their physical safety from an attacker or abuser, or fighting back against lawmakers who would deny reproductive autonomy to all women.

Now (Or Ever) Is Not the Time to Waiver on Abortion

You don’t gain ground by losing your principles. Democrats need to stand firm in defending abortion rights if they want to succeed with voters, was the message from Planned Parenthood’s Cecile Richards after the chair of the Democratic Congressional Campaign Committee said that abortion shouldn’t be a “litmus test” for Democratic candidates. First of all, Americans are overwhelmingly in favor of abortion rights. Perhaps more importantly, any wavering or capitulation on a core principle like reproductive rights could demoralize die-hard voters while failing to bring aboard any young or new voters. This new wave of American activists will be more impressed by a party that stresses principles, not pandering!

Put Your Thing Down, Flip It, CAN'T REVERSE IT

What’s done is done—but that doesn’t stop the charlatan anti-abortion crusaders from telling people it can be undone. So once more, into the bullshit breach—THERE IS NO SCIENTIFIC EVIDENCE TO SUPPORT CLAIMS THAT MEDICATION ABORTIONS CAN BE REVERSED. It all comes from a San Diego quack who says massive amounts of progesterone can stop a medical abortion if given after the first pill in the process is taken and before the second pill. So-called tests were so loosely administered that there’s no proof the first pill was even taken. The American Congress of Obstetricians and Gynecologists, not only disavows the technique, they say high doses of progesterone can be dangerous. But that makes no difference to the frauds who are pushing this lie just to promote their other lies about “abortion regret.” Somebody tell these losers that it’s over. Just ask ARIZONA…

Arizona- Show Me The Money

You see, those lies about “reversible” abortion come with a high price tag. ARIZONA has been ordered to pay over $600,000 in legal fees and other costs to Planned Parenthood. It’s money that PP spent fighting a law that required abortion providers to tell patients that medical abortions are reversible. That is NOT backed by science. What IS reversible is the money PP had to spend countering those lies. And that’s backed by a U.S. District Court Judge. The law mandating the lies has been repealed. But part of the reason for these ridiculous laws is to deplete the resources of abortion providers in expensive battles to fight them, so this ruling is almost as important as the overturning of the law in the first place.

Sorry Not Sorry Nazis, Planned Parenthood is Not the Same Fucking Thing

Big White Lies! It’s Propaganda 101, ironically enough—if you don’t have any rational arguments, just call your opponents white supremacists. That’s what the anti-choice pseudo-intellectuals at The Federalist are trying to do to Planned Parenthood. It’s not easy to draw parallels between an organization devoted to women’s health and one devoted to bringing back the Third Reich, so we won’t try to unravel the twisted logic. Suffice it to say that once you start yelling “Nazis” at people, you’ve pretty much run out of persuasive arguments for denying women control of their bodies. But thanks to The Federalist for engaging in debate. We look forward to your Satanic Cult argument.

Exposing in the ATL

More press from the badass #ExposeFakeClinics protest at Netroots Nation spearheaded by the incredible organizations Sister Song and ReproAction! Read, share, and keep calling out CPCs! 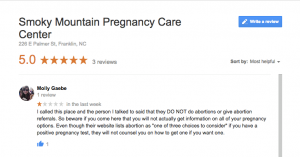 Move those thumbs! Help Molly call out this FAKE CLINIC in North Carolina by upvoting her google review, or call a CPC like Smoky Mountain Pregnancy Care Center and write an accurate review of your own! If you’re reading this on a phone, laptop, tablet, or desktop (and if you’re not, OMG HOW?!), you’ve got the whole world wide web in your hands. Visit exposefakeclinics.com for more info and guidelines.