Not. A. Fucking. Wedge. Issue.

ROTTEN TO THE CORE PRINCIPLES: The Democratic Party has forgotten that votes are based on principles—and selling out principles, LOSES votes. The chairman of the DCCC, the Dem campaign arm, claimed today that there will be no “litmus test” for anti-abortion Democratic candidates. “Anti-abortion Democrats” should be an oxymoron, morons! There’s a term for such people, and it’s Republicans. Abortion rights are missing from the Democrats’ big “A Better Deal” policy push centered on jobs. HELLO! Reproductive rights ARE an economic issue! As EMILY’s List says “One of the most important financial decisions a woman makes is when and how to start a family.” Dems need to understand that now. Principles and practicality are ONE! If you don’t stand for something, you’re gonna fall.

You Think You Know.. But You Have No Idea, This is the Diary of a Clinic Escort

ANGELS IN DAY-GLO VESTS: HUGE thanks goes out to Glamour for giving a shout out to the clinic escorts who form the front lines in the struggle for reproductive access! From enduring the taunts and harassment of the anti-abortion protesters to providing emotional support and physical safety to patients, to just dealing with hours standing in all kinds of weather, these people are the unsung sheroes and heroes of the abortion rights movement. We need to listen to their counsel on when and how to counterprotest. And we need to show them the love and appreciation they deserve. Find the time to bring an escort a cup of coffee and a smile. And take their advice and help out by raising your voice and supporting all clinic workers!

Alabama Takes the Cake, and the Cake Sucks

TRIAL BY FIRE-BREATHERS: Missouri and Texas may excel in the sheer amount of anti-abortion lunacy, but give ALABAMA credit for shocking and truly sick originality. A federal court just (thank God!) struck down an Alabama law that forced minors seeking an abortion to go through a trial—facing prosecutors and a lawyer for the fetus! Prosecutors or fetal counsel (would that be the term?!?) could call the girl’s teachers or the person who impregnated her. Already this horrific law was used against a 12-year-old Alabama girl who was raped by an adult family member. The length of her trial ended up forcing this fifth-grader into a second-trimester procedure! Alabama lawmakers have serious problems—thank goodness they don’t have this law to torture people with anymore.

Things That are Quirky: Art Teachers. Things That Shouldn’t Be: Passing Abortion Laws

QUIRKIN’ IT: A “quirky” legal and vote-counting snafu in TENNESSEE might sink the state’s nasty anti-abortion constitutional Amendment 1. It’s been in court since voters went to polls in 2014, and anti-choice turds have their own cheating natures to blame. Tennessee has a weird law where a constitutional amendment must get votes from “a majority of all the citizens of the state voting for governor.” Supporters of the anti-abortion amendment were told to vote for it, but not for governor at all, to effectively lower the bar for passage. So now there’s a huge legal mess over how to count the votes. Of course, in the meantime, Tennessee has passed TRAP laws, waiting periods, mandatory counseling, and a 20-week abortion ban. Tennessee lawmakers won’t let their incompetence stand in the way of their bad intentions!

Put a Lil' Champagne in Your Morning Coffee, Indiana

INDY WINNERS! Aaaand… some GOOD news from INDIANA! The Planned Parenthood Center at Merrillville can once again provide abortion services. Procedures had been suspended since July 13 while the clinic found a back-up doctor with local hospital admitting privileges, as required by Indiana law. These “hospital admitting privilege” laws are unnecessary TRAP laws that many states use to try and shut down clinics. Seven other states have such admitting-privilege requirements. PP in Indiana was able to stay open—this time. We need to fight unjust laws—and find ways to comply with the ones we haven’t defeated yet! 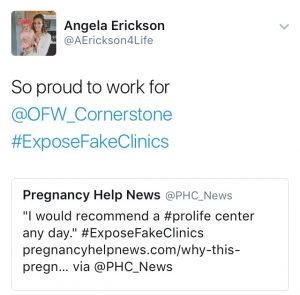 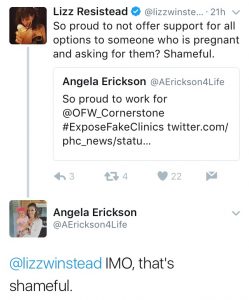 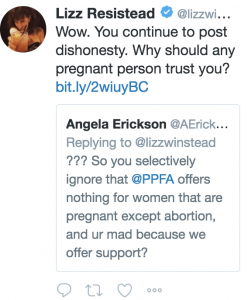 Exposing made easy! A worker from a fake clinic in Minnesota called, Cornerstone Options, who is supposed to HELP pregnant people, admits they find abortion “shameful.” We fixed your slogan for you, “ (shaming), (shaming), & (SHAMING).”