Dixie-Crap: Former ARKANSAS Governor Mike Huckabee is equating reproductive care with racism. Mike doesn’t like people tearing down Confederate monuments: “That's vandalism, it's anarchy, and it would be like me saying I don't like abortion clinics — so I'm just going to go tear them down because I find them offensive.” That makes no sense when you first read it, and even less as you think about it. Oh, and STFUpabee isn't alone In this bizarro take.  Glenn Beck tweeted: “If you want to tear down racist monuments, you need to start with the living monument dedicated to white supremacy: Planned Parenthood.” So because PP helps Black women get reproductive care,  they’re the same as slavery apologists who want them to have no freedom at all. Wut? More twisted logic for twisted ideas.

Sterile Cuckoo! If you really want to make comparisons between reproductive rights and white supremacy, you should start in TENNESSEE. The state is being sued over a program that gave prisoners reduced sentences if they submitted to forced sterilization. No need to read that again—that’s really what it said. We told you before about the program from Sheriff Oddie Shoupe (not made-up name, either) that gave reduced prison time to male inmates who got vasectomies and female inmates who got multi-year birth control implants. Sheriff Oddie was forced to suspend the program when it came to the attention of people familiar with the US Constitution and basic human rights. Now an inmate is saying she was coerced into the program—and still not given a reduced sentence! The scheme was compared to Nazi eugenics programs, so maybe Donald Trump will have some kind words for it.

Life, Health, Auto, Rape: Well, it’s official! Texan women now need RAPE INSURANCE.  If you’re following the descent of TEXAS into repro rights hell, you know that Governor Greg Abbott has now signed a bill that prohibits insurance companies from covering elective abortion—with NO exceptions for rape or incest. So now Texas women who are planning ahead and who don’t want to be raising the child of their rapist and/or relative, will need to purchase supplemental “rape insurance.” And they’re far from alone. 10 other states already have similar laws.  So this is one dumb idea that Texas lawmakers don’t lead the nation with.

It's coming from inside the Post office! Some sick fuck in MINNESOTA defaced mailers from Planned Parenthood by scrawling threatening messages on them. Several PP mailers arrived in the US mail with “Death” and “Die” written across the PP return address. You have to immediately suspect some anti-choice nutbag, even if the threats were spelled correctly. The Postal Service says it’s investigating. In the meantime, you can hear the same sentiments chanted by similar nutbags outside of any abortion clinic.

Male Tears For Your Coffee Cup This Monday

Tears of a Clown: An anti-choice nutcase who likes to spend his spare time harassing clinic patients is crying because his repeated attacks leave him liable to arrest. Well Boo Fucking Hoo. Stephen Nylen is suing over the noise ordinance in Grand Rapids, MICHIGAN. Little Stephen says he has been threatened with arrest by police, no doubt during his threat-laced diatribes outside of abortion clinics. Yeah. Nothing ruins a fun day of hurling threats of eternal damnation at crying women than having a cop remind you of the rule of law. Stevie, if you’re such a sensitive shit, maybe you should find another hobby. Don’t you people have a whole craft store dedicated to preventing reproductive healthcare?

Thanks to your hard work, this CPC review went from having 3 reviews and 5 stars to 21 reviews and 2.6 stars! Now people searching for abortion in North Carolina are less likely to be manipulated by Smoky Mountain Pregnancy Care Center’s lies! Let’s. Keep. Exposing. Fake. Clinics. Today’s task: Amplify Anna’s review by upvoting or writing a review of your own. YOU can make a difference right now! 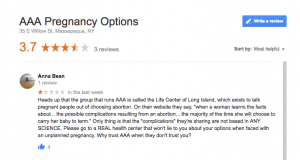