Fight! For Your Rights! To Pa– Oh, To Literally Everything

Skill Set—Ilyse Hogue, the president of NARAL Pro-Choice America, talks about the negotiating skills needed in the fight for gender equality to mark Women’s Equality Day. NARAL is the oldest abortion rights organization in the US, with over a million members. You don’t lead an organization that size without knowing the dynamics of negotiation. More important is a realization that you’re doing it for a principle and ultimately, for people. Thanks, Ilyse!

Select few: Let’s cut through the crap about sex-selective abortion bans! They’re based on outdated data and racist assumptions. There’s a narrative out there that Asian Americans have a “son preference,” based on a 2008 study that used stats that are 20 years old now. More recent research shows little or no evidence of any such thing. Yet over half of the states have considered bills banning sex-selection, and 10 states have recently passed laws against sex-selection abortions. These bans spread a false and racist narrative—and could lead to medical professionals profiling Asian women if they’re worried about complying with the laws. And they’re just a part of the overall effort to chip away at abortion rights using any lie or misconception available. Choice means not having that choice questioned with racist assumptions.

The Razorback’s Edge: ARKANSAS is an example of a state that just passed a “sex selection” law. That law, along with three other new restrictions, have been put on hold by a federal court. Now Arkansas is appealing that hold. Beside the “sex selection ban, the laws include a ban on the safest and most common method of second trimester abortion, a law requiring law enforcement (!) to be informed if a girl under 17 has an abortion, and a law allowing fathers and family members to weigh in on the disposal of fetal remains! The laws are a truly ugly bunch of repro restrictions. It’s a vivid reminder that once these twisted laws get put into effect, it requires constant legal and PR battles to fight them.

Wiping out the footprints: SOUTH CAROLINA has joined the repressive march to sacrifice women’s health services to a mania for defunding anyone who has ever had anything to do with abortion services. SC Governor Henry McMaster issued an executive order that prohibits state or local funds going to “any physician or professional medical practice affiliated with an abortion clinic and operating concurrently with — and in the same physical, geographic location or footprint as – an abortion clinic.” Gee, is it OK if they once appeared in the same phone book as an abortion clinic? This is obviously aimed at Planned Parenthood, and it endangers the thousands of South Carolina women who depend on PP for birth control, cancer screenings, and other care. Oh, and anyone who shares their “footprint.”

Inside Job: The head of the utterly bat-shit anti-choice group Operation Save America, Rusty Thomas, boasts that they have connections “working within the state government” of KENTUCKY. That’s not surprising, considering that the Kentucky government is just as bat-shit over abortion rights. But they also seem to have ties to Matt Trewhella, who we told you about last week. This theocratic nutcase says women who have abortions should be charged with murder, and that local officials need to defy laws that conflict with their religious beliefs—like laws that decriminalize no-fault divorce, adultery, and homosexual acts. Rusty Thomas said that a Kentucky “congressman” who he didn’t identify, ordered thousands of copies of Trewhella’s book. We already know the book is a big favorite of KY Governor Matt Bevin. It’s no wonder that people “within the state government” of Kentucky are working with these radicals. The nuts don’t fall far from the tree.

The extreme anti-choice group, Abolish Human Abortion, is posting awful, offensive photos on the Google Maps review pages for clinics. Could you flag these images on the Planned Parenthood of Wilmington, North Carolina page and DM @calloutfakeclinics on instagram if you see this happen other pages? You know what they say: it takes a village to shut down BULLSHIT. 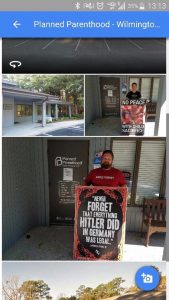