UTTER CONTEMPT: Slimeball propagandist David Daleiden has just been held in contempt of court for continuing to release illegally obtained and heavily tampered-with videos. Da-LIE-den is one of the vidiots from the so-called Center for Medical Progress who released tapes in 2015 that were doctored to indicate Planned Parenthood was selling fetal remains. The tapes were shown to be bullshit and PP was cleared of any wrongdoing. And now this virtual stalker is charged with 15 felonies for secretly recorded videos—videos that his lawyers CONTINUE to publicize in defiance of a court order. All of the illegal activity involving these tapes has been committed by Daleiden and the people who made them!

Not Real Science 101- An Intro to “Abortion Reversal”

REVERSE ENGINEERING: Anti-abortion myth-makers have been busily concocting another lie to foist on the public—one that we at LPJL have been warning you about. It’s the pseudo-scientific turd pie of being able to “reverse” medication abortions by intervening in the 24 to 36 hours between the taking of the two pills that are used in the procedure. The “science” behind reversal is anecdotal quackery being pushed mostly by one obsessed doctor. But thanks to his fairy tales, now 10 states require abortion providers to LIE TO PATIENTS and tell them that medication abortions can be “reversed.” Anti-abortion scammers are hiding behind fake science the way they hide behind phony efforts to “help women” with TRAP laws that only harm patients. If anti-choice people had anything good to say, they could say it without hiding behind lies.

DON’T GET FAKED OVER by fake clinics! And learn how to expose them to protect others! July 17 to 26 is Expose Fake Clinics Week, where we shine a light on the anti-choice maggots under the slimy rock of deception. Fake clinics are those “Crisis Pregnancy Centers” (CPC’s) that fool people seeking abortion services or information into thinking they’re an actual medical facility. Then the unwitting victims are deluged with lies and shaming designed to pressure them out of making their own decisions. And of course these shame-mills are generously funded by your tax dollars in many states. Texas alone has thrown millions to these scamsters. LPJL IS FIGHTING BACK AGAINST THESE HORRIBLE PLACES, in fact check out yesterday's protest in Pittsburgh in our Vagical Mystery Tour update below to see what LPJL is doing to fight back!

Land of the Semi-Free, Home of the State by State Attack on Repro Rights

STATES OF EMERGENCY! While most of the media is transfixed by the shit-show going on in Washington, the real work of building an evil empire of theocratic hate and misogyny is going on at the state level. And reproductive rights are a prime target. In 2017 alone, 28 states have tried to put more restrictions on abortion, with many of them aiming to eliminate it entirely. Even Texas, which had their HB2 slapped down by the Supreme Court, went right back to more weasel-work to undermine abortion rights. There are efforts all over the country to ban the safest and most common 2nd trimester abortion procedure, force fetal tissue “burials,” and make it harder for minors to exercise choice. And taxpayer money continues to be wasted on fake clinics and abstinence programs. That’s why LPJL works tirelessly to inform you about what’s happening in YOUR state!

From the Antis: Can You Believe Planned Parenthood Thinks Even SEX WORKERS Deserve Healthcare?

TRAFFIC SCAM. Jeezus! Is there any depth anti-abortion hate-mongers won’t sink to? They try to smear abortion care providers as abetting sex trafficking when the providers offer possibly life-saving care to sex workers, including those who may be caught up in trafficking. These ghouls send undercover “journalists”/stalkers to clinics posing as pimps. When the clinics offer to help the victims, they’re portrayed as being involved in “underage sex trafficking.” I guess the “pro-life” approach would be to cast them out for their sins and let them rot with whatever medical problems their victimhood has caused them. Compassion means care, not judgment, dickwads!

Our LPJL Pittsburgh stop has gone next level as we #ExposeFakeClinics

Spoiler Alert: Fake clinics hate when you come armed with facts – especially when those facts come from badasses in costumes

Check out the fun we had here and once you’re all riled up – come to Mr Smalls TONIGHT, doors 7pm! 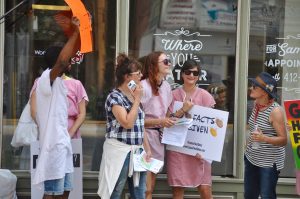 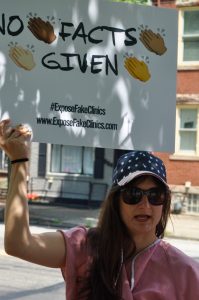 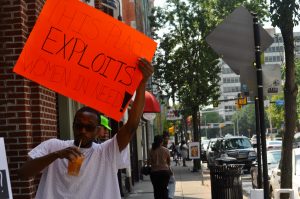 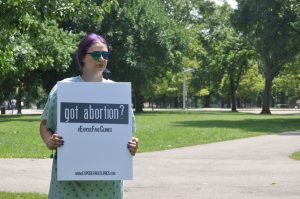 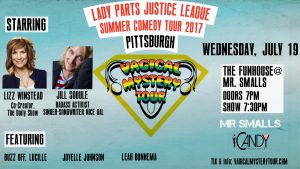