The Room Where it Happens (And What's Happening is Harming Women)

UNDER PRESSURE: If you’re going to push an awful idea, you need some awful people behind it. So the Trumpists are lining up anti-abortion shit-show agitators like the Susan B.
Anthony List to pressure Republican Senators to support the shit-show of a health care bill that Mitch McConnell is STILL trying to ram through Congress before it rams through your uterus. This healthcare atrocity is horrific in general, and worse in particular, especially when it comes to contraceptive care and reproductive care, with the defunding of Planned Parenthood and the overturning of the Obamacare contraceptive mandate. Reproductive rights are human rights—and both are threatened by this bill that won’t die!

GOOD MORNING! Want some endangered reproductive rights with your coffee? Kudos to CBS This Morning who served it hot with a morning news piece about the Festival of Intolerant Fanatics (our term, not theirs) being held in LOUISVILLE this week in an attempt to shut down Kentucky’s last remaining clinic. It’s nice to see some coverage of abortion issues! If the Pageant of Hate has accomplished one good thing, it’s in drawing attention to the hate. We at LPJL tried to do the same—and to lift the spirits of those battling the darkness with the final stop on our Vagical Mystery Tour in Louisville. Read all about it below & see how you can help! Let’s form a buffer zone of love and support around all independent clinics.

The Pre-existing Condition of Being a Woman: High Risk Pregnancy Edition

RISKY (AND DIRTY) BUSINESS: Oh, TEXAS Republicans, how many ways can you find to fuck women over? The NIGHTMARE that is Texas Senate Bill 8 keeps on happening! The bill bans PRIVATE insurance plans from covering abortion—with NO EXCEPTION for fetal anomaly! The situation would have to be a “life threatening physical condition” defined as “places the woman in danger of death.” And that means that many women with high risk pregnancies WOULD be put in the danger of death—and then and then only would their insurance cover what their doctor recommends! Women would be forced to delay getting treatment until their lives were in danger, or pay likely many thousands of dollars in medical bills. All SB8 does is to increase the risk in high risk pregnancies.

It's 2017 And This is an Article About FORCED STERILIZATION

GETTING SNIPPY: Choice means being able to choose when you don’t want or when you DO want to start a family. And it seems that conservatives don’t want to give you either choice… depending on who you are. When “pro-lifers” aren’t pushing middle-class white families to breed like captive Osmonds, they’re trying to find ways to reduce the number of black and brown babies—but of course without treading on their own self-righteous pro-life-ness. Here’s an old favorite back with a new twist—a TENNESSEE judge will knock 30 days of your sentence if you submit to sterilization by vasectomy or birth control implant. Of course, that’s the approach of the racist-inspired eugenics movement of a century ago—“undesirables” have to be kept from poisoning the gene pool! But it shows that conservative “family values” only count for certain families.

#ExposeFakeBitches and Call Out Local Politicians

There are 3 DAYS LEFT of our #ExposeFakeClinics Week of Action, and close to 4,000 CPCs to CALL OUT! You can make a difference FROM YOUR PHONE by calling fake clinics and leaving and accurate reviews online. Share this post with your friends to get the word out!

Check out our partners taking action all over the country! 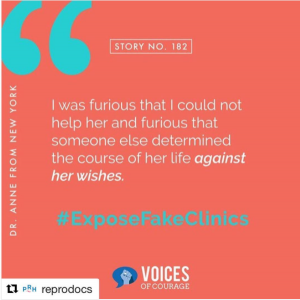 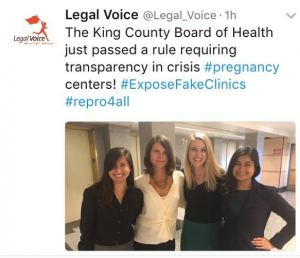 You know what they say, time flies when you are traveling across the country, putting on kick ass comedy shows, and celebrating independent clinic staff superstars. Thats right, The Vagical Mystery tour wrapped up this weekend, and we can’t believe it either!

We left our hearts in Louisville, where hundreds of anti abortion extremists have descended for their high school bully convention this week. The one clinic left in Kentucky will be the target of a solid week of rath and we helped them prepare by repainting the buffer zone lines at the clinic so the masses of proverbial goons (good band name) will be able to clearly see when they are literally crossing the line. 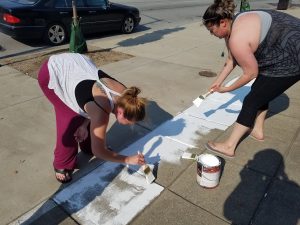 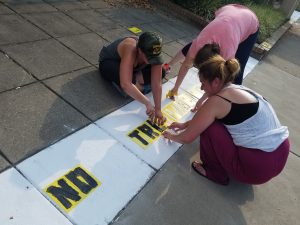 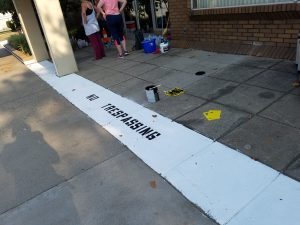 That night, Gina Yashere, Jill Sobule, Holly Miranda and Ambrosia Parsley joined us for a comedy and music/ pep rally to let the good folks of Louisville know how they can support the clinic during this week of attacks. 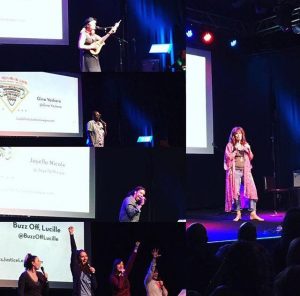 Today we head home- after 8 weeks, 16 cites, 4,000 miles and hundreds of new volunteers signed up to work with their local providers and activists! Now it’s time to regroup and harness the incredible power of communities we worked with this summer. Also maybe sleep. But probably not.

Also, you don’t end a tour without bomber jackets and tattoos. So we didn’t. 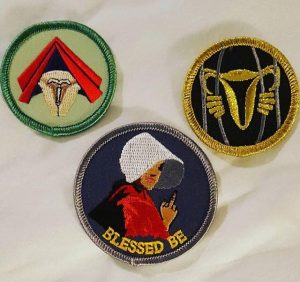 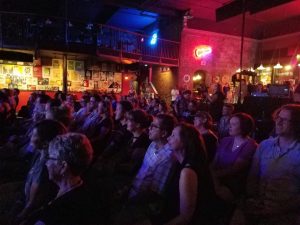 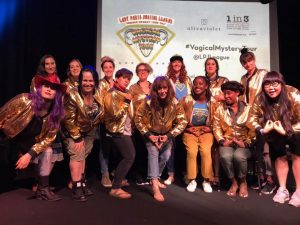 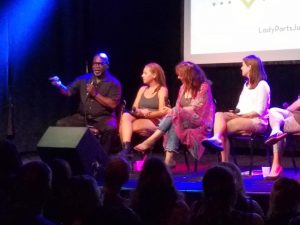 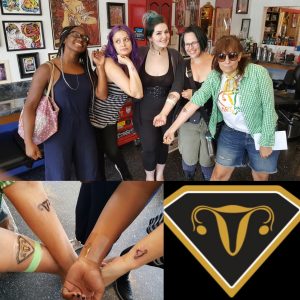