HEALTH DISSERVICES: The looming Trumpian healthcare implosion threatens us all, but it threatens Women of Color more than most. They’ve gotten the shitty end of the stick forever—and now there’s even more shit on the end of that stick.  Over the past few years, health conditions for WOC had improved, but that’s going down the drain along with everything else touched by Trump. Brutal cuts to Medicaid under the GOP healthcare plans impact more Black and Hispanic women—they’re almost twice as likely to be insured by Medicaid. Repeal of Obamacare threatens minority women’s access to maternity coverage, contraception, and family planning. Defunding Planned Parenthood will deprive them of preventative care like cancer screenings. And the recent assault on abortion rights impacts Women of Color harder—they make up half of the women who live in states that lack abortion services for Medicaid enrollees. Help push back on behalf of everyone—RESIST & PERSIST!

MISSOURI’S ANTI-CHOICE AWFUL CHOICE: Missouri, which is currently holding an anti-abortion orgy in the form of a special session of the legislature, may soon try to send some of its toxic waste to Washington. Anti-woman crusader and current MO Attorney General Josh Hawley is making noises that he’ll run for the US Senate seat now held by Dem Claire McCaskill. As an anti-abortion fanatic, Hawley manages to stand out even in a nuthouse like MISSOURI Republican politics. He said last year that “abortion is not a right. It is a violent act against the defenseless. It violates every principle of morality and should be barred by American law.” And he has vowed to use his AG post to crush the only clinic in the state and to support the FAKE crisis pregnancy centers that infest Missouri. Josh Hawley is one of the reasons Missouri is in the mess it’s in.

NO MO! And speaking of MISSOURI, it’s already the biggest sinkhole for abortion rights this side of Texas, and it’s determined to suck harder. As part of their Special Session of the Damned, MO legislators have just passed a law that requires people seeking an abortion to have a meeting with the doctor performing the procedure as part of the waiting period, it imposes unannounced inspections on clinics, and requires that ALL fetal tissue be sent to a pathologist. Oh, and it lets MO’s nutcase Attorney General (see above!) go after abortion providers regardless of whether local authorities want that. WOW. Can Texas lawmakers hold onto their title of Most Hateful to Women? To be continued…!

EXTRA BAD: Nope, TEXAS can always create a bigger mess! The Texas Senate is working on a bill that would force people to get separate health coverage for abortion services and pay a separate, extra premium. Seriously! “Honey, did you pay the abortion insurance premium?” HELLO! People don’t anticipate the need for abortions—hence the need for abortions!! And of course this bill has no exceptions for fetal abnormality, rape, or incest. So a person has to have the foresight to realize in advance “I better get that abortion coverage, in case Dad rapes me.” That’s not the real world—that’s Texas politics!

No one ever said terrifying sidewalk bullies weren’t morning people!

THE EARLY TURDS: Ever wonder how hateful bigots start their day? Here’s a piece from ThinkProgress about how the bully crew that harass and intimidate patients at KENTUCKY’s last remaining clinic spend their mornings. Unfortunately, the piece focuses mainly on what it looks like when Operation Save America descends on Louisville to torment clinics with their weeklong shriek-fest. What is doubly fucked is that even without the OSA invasion, the clinic is STILL assaulted by hundreds of local zealots… and the court-imposed buffer zone that keeps it all from swamping the patients is only in place during the OSA invasion which ends this weekend. Problem is, this clinic needs a permanent buffer because the assaults WILL continue. The state only granted the buffer zone this week because the world is watching. Let them know we’re still watching—and give the clinic a PERMANENT BUFFER!

For the final #ExposeFakeClinics Week of Action day, NARAL Ohio organized not one – but TWO protests in the Buckeye State. Watch their FB live here! These Fake Clinics aren’t going to expose themselves (or are they?), so we have to keep fighting! Save exposefakeclinics.com on your browser, and keep writing (and upvoting) those accurate reviews and share the links on social media so we can all click and upvote! You can actually make a difference one click at a time! 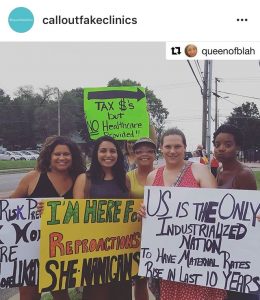 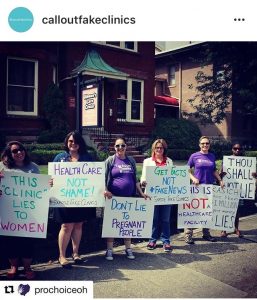