SHITSTORM ALERT! The proposed Trump administration budget is bad for everyone–and worse for women. It reads like a sadistic fantasy dreamed up in the bowels of some right-wing, anti-abortion, anti-women stink tank. It ELIMINATES ALL funding for Planned Parenthood. It converts Medicaid to block grants fucking DESTROYS MEDICAID, and it would put the cost of birth control and much of women’s health care out of the reach of many women. These are literally the most inappropriate appropriations ever proposed. It’s is more like a declaration of war than a budget proposal.

UPDATE ON THE REPRO-CALYPSE! The transformation of the once-great state of Texas to Dystopia is moving along rapidly. Texas lawmakers theocrats have passed a bill to do everything from mandate burial or cremation for fetal remains to outlawing the safest 2nd trimester abortion procedure. Texas women donned outfits from “The Handmaid’s Tale” to salute Texas’s steady march to the dystopian future.

Listening To Post-Abortive Women Can Never Justify Abortion (The Federalist)

We were waiting for a response to this NYT opinion piece about listening to people who have had abortion and this Crackpot dude from The Federalist did not disappoint. THESIS: “Only listen to women who regret their abortions, not women who don't. He then proceeds to discredited actual facts with fake scientific studies, manufactured by discredited quack organizations. WHY YOU NEED TO CARE: It is posted in a supposed legit conservative website. We need to know what they're saying so we can fight back!

How many Yelp reviews will it take for the place to be held accountable? One? Two? Maybe fifty? 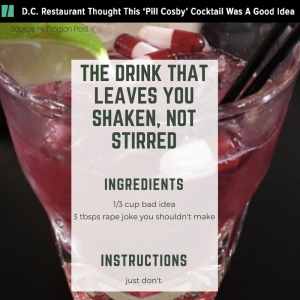 Access to Birth Control Is Not a Religious Debate (Motto)

REPRO-JUSTICE MIC DROP FROM Jessica González-Rojas! (Not to be confused with the Jessica (Williams) below).

Here’s a great slap in the smug face of everyone who tries to make access to birth control into some kind of debate over morality or “religious freedom.” It’s a great opinion piece spelling out–for those too bigoted to understand–just why birth control is a matter of economics–pure and simple, stupid.