Ohio is into the Latest Trends. Like Defunding Planned Parenthood. 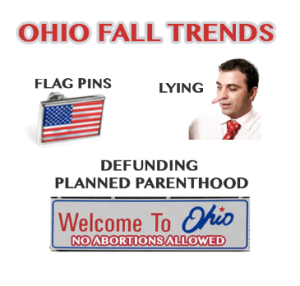 Defunding Planned Parenthood. Aren’t we over this trend already? It’s so yesterday.

Ohio’s the latest state to hop on the defunding PP bandwagon. The Republican-controlled house voted on the bill HB 294, which sets out to redirect funds from places that promote or perform elective abortions.

This isn’t the first time Ohio’s tried it with abortion providers. Back in 2013, Gov. John Kasich signed a budget bill that effectively shut down half of the clinics that provided abortions in the state.

When these clinics end up being shutdown, that provides an undue burden upon the patients and the remaining clinics that are inundated with new clientele. It’s like trying to stuff all of your groceries into one bag after one breaks. It’s a precarious position to be in.

Power to the people. During the hearings for the new bill, protesters who are pro-life in the literal sense (not the anti-choice way)  “Respect the living. Fund Planned Parenthood.” Great point. That’s a trend we can get behind. Respecting the living needs to be en vogue.  H/T http://rhrealitycheck.org/article/2015/11/18/ohio-republicans-vote-defund-planned-parenthood/