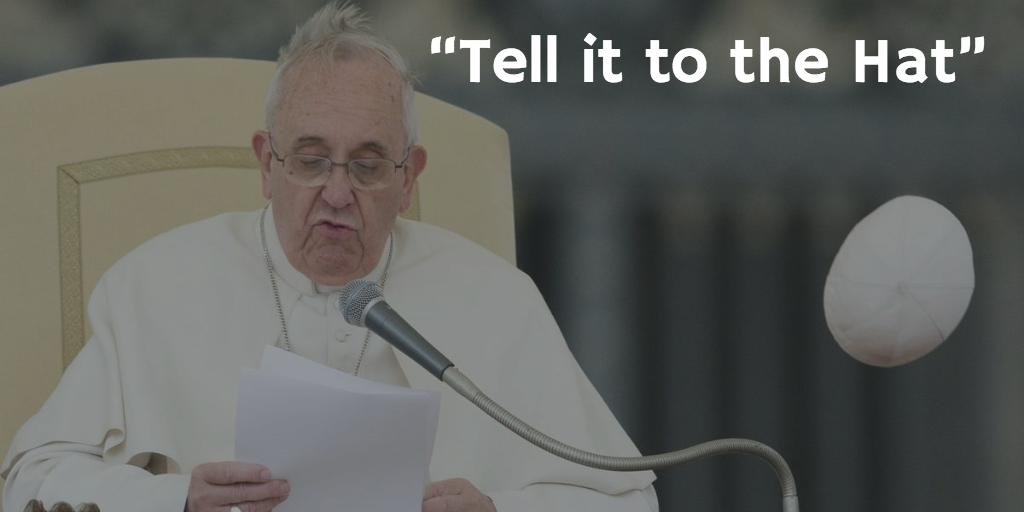 Big news from the Ministry of Silly Hats! Mr. Big Hat himself, AKA THE POPE has announced new rules concerning abortion rights… or as they call them at the Vatican, “Grave Sins.” It’s actually reasonably good news… at least as good as it gets from an organization whose ground rules were written when women were routinely stoned to death for adultery.

Pope Francis has ruled that from here on out, Catholic priests have the power to forgive women who have abortions. OK… right off the bat, we’d like to say we appreciate the gesture, but we’d like to think that forgiveness was unnecessary. But then we realize that 2,000-year-old institutions get to be a tad hidebound.

Prior to this, a woman who was excommunicated for the “grave sin” of abortion could only be forgiven and welcomed back into the church by a bishop (and bishops for some reason can only move diagonally–church law is complex.) Now, any priest can do the requisite paperwork and/or prayer-work, or whatever is involved. (Incidentally, those priests can only be male, but that’s a whole ‘nother kettle of Friday fish.)

As we said, ideally a woman’s control of her own uterus is a human right, not a “grave sin.” But then the Pope–as relatively forward thinking as this one may be–is the very definition of “old school.” That’s why he dresses like Lady Gaga. And abortion has been on the ecclesiastical shitlist for as long as sorcery, heresy, and homosexuality. John Paul II, generally regarded as one of the more cuddly popes, flat out called it “murder.” So we’re taking baby steps here, people.

The church ban on abortion goes back to the days when the Catholic Church was desperately trying to outbreed pagans, Jews, and heretics. And then in the following centuries they had to pop out babies faster than Muslims, Protestants, and modern secular types. And honestly, the whole “as many babies as possible” thing has been a winning strategy for them, as anyone who has ever been in the crowded slums of South America can attest.

Pope Francis wrote “there is no sin that God's mercy cannot reach and wipe away when it finds a repentant heart seeking to be reconciled with the Father.” Well, there’s what’s holding you back, Francis! If you accepted the possibility that it might just be “the Mother,” then you might be a tad more progressive on women’s issues. But thanks for trying!