OK so let’s talk about the vulva. Guys, the Vulva costume, made the anti-choice haters so mad! BIG MAD! Activist Mommy, one of the hateful anti-abortion people, was totally obsessed with us. We don’t even have to like, make a case for her being awful, literally just watch ANY of her videos where she calls feminists sick or goes on a crusade against a Drag Queen story hour … like literally this weirdo hates reading.

We were honestly glad to get some of her hate cuz it seems like she only hates things that are cool. She posted our pics A LOT and wrote things like, “Just goes to show you that they are all serving their father the devil, who loves sexual anarchy and death.” HAHAHAHAHAHA! Like we were saying, obsessed.

We gave them what they wanted (our attention) and  followed them to Madison on Thursday last week to counter their big ecclesiastical court. Look, you gotta fight garbage fyre with a glittery vulva, it’s just the rules. And let us TELL you EVERYONE in Madison thanked us for being there. Like, nary a person said “Hey, we’re actually with the anti-abortion guys, they seem normal and DEF not like total weirdos.”

Anyway vulva was there and so was SHESUS. Now, look, some of us here are religious, some don’t even know about WEDNESDAY CHURCH! But Shesus, she’s for everyone. She tells it like it is, she doesn’t bullshit, she doesn’t hide behind some message of hate. She’s real. She loves.

Activist Mommy blamed us for the blackout in Madison the next day. “They had a woman in a blasphemous Jesus costume twerking and mocking and were celebrating abortion. I personally lobbied 11 senators offices yesterday at that Capitol, and got to rebuke one particular Democrat Senator, showing him a picture of the babies he supports killing.”

Which of those sentences is scarier… us TWERKING or the fact that literal dumbass Activist Mommy got to talk to state senators???

Also again, we were BOTH there… WHO IS TO SAY WHO GOD IS SMITING!?!?! 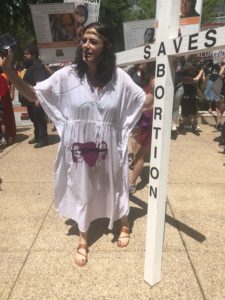 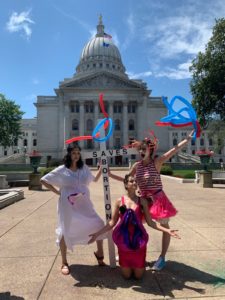 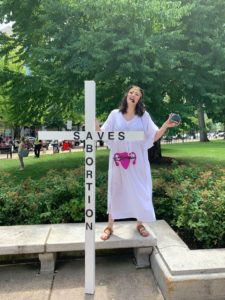 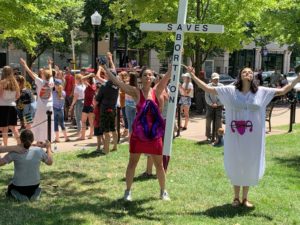 DECEMBER CRAFTIVISM! Need a cozy craft to warm the

Since the fall of Roe, there's been a dramatic upt