Pregnant People: A Danger to Us All! 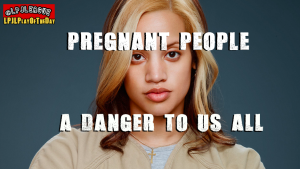 “New York in 2009 passed a law banning the use of shackles on incarcerated women during labor, delivery, and recovery. Shackling, which can include placing handcuffs, waist chains, and leg irons on a pregnant woman, has been widely denounced by the medical community: the American Congress of Obstetricians and Gynecologists has called the practice “demeaning and unnecessary”; the American Medical Association simply calls it “barbaric.”

LEG IRONS! Those things you put on slaves. Or people like Hannibal Lecter. But good news that it’s banned, right? WRONG! There are plenty of violations on a regular basis. In the five years following the ban, 23 out of 27 women who gave birth while in state custody were shackled. That’s only a little more than 85%. They’ve got a solid B+ in human rights violations. I give them an A for effort. The effort they’ve put into humiliating and hurting pregnant prisoners.