President Obama Nailed It, But So Did Ilyse Hogue 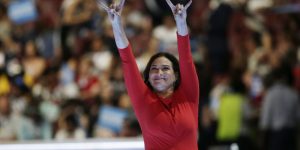 The president of the National Abortion and Reproductive Rights Action League Pro-Choice America Ilyse Hogue gestures as she leaves the stage at the Democratic National Convention in Philadelphia, Pennsylvania, U.S. July 27, 2016. REUTERS/Gary Cameron

Last night at the DNC, President Obama gave the greatest speech I have ever seen.

But for me, the speech President of NARAL Ilyse Hogue gave earlier in the night was maybe the most groundbreaking. Ilyse told her abortion story. She told America a story that is familiar to many women. And the fact that she did it on the stage that nominated the first woman as the candidate for President of the United States is historic.

It can’t be said enough that we need to tell our stories. We need to say abortion. We need to remind people that everyday good women have abortions.

There are not good abortions and bad abortions. There is the abortion you need and your reason is good enough for me.

That may sound radical, and that to me is a problem.

As advocates, when we hesitate saying abortion, or say it in whispers, the fallout comes in many forms. it validates the  anti abortion zealots so often spew that we are running away from it because we are hiding something. We cannot allow them to drive our narrative. It can also make the amazing physicians who perform abortions feel like they are not supported and that we feel their work is some sort of necessary evil. That one is what keeps me up at night. I have so much love and respect for providers that anything that is less that celebratory of their work should not stand. And lastly, as an abortion rights advocate and a person who has had an abortion, I can tell you, when I am challenged to “tone it down” or told  “It’s pro choice, not pro abortion,” it makes me feel like I did something wrong and that my abortion is something to be tolerated, but open to judgment. Abortion is not who you are, it is a medical procedure you may need to have, yet when we avoid saying the word, it makes me feel like I am being defined negatively by my abortion when I talk about it. The irony is, because I was able to have an abortion, I can define myself as whatever I want.

Truth is, by dancing around the word, and by putting caveats on it like, “No one likes abortion” you make people who feel relieved they had an abortion feel guilty about that relief.

It is a form of shaming, and shame paves a path of eroding confidence. We cannot let that stand when someone needed to have an abortion on her journey to find her personal power.

Last night Ilyse Hogue shattered some stigma and showed us what an abortion rights leader looks like and in a week of so much history being made, I wanted to highlight this great womans part in it!