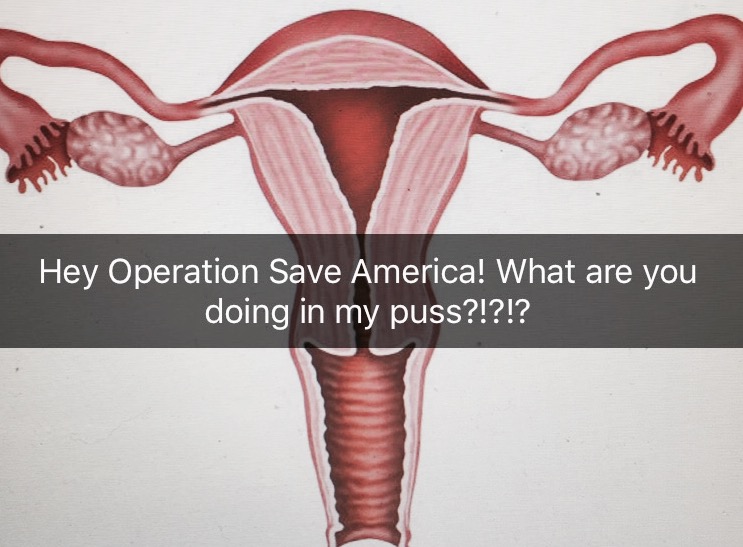 We seem so obsessed with terrorist groups who are somehow “others” – coming from the outside to impinge upon our democracy and freedom. Yet we barely even red flag the hate groups from within our country who are marauding outside clinics, holding violent pictures of dead babies in the streets, MURDERING, one doctor in his kitchen and one in his clinic. Domestic terrorist groups who think laws don’t apply to them. Meet Operation Save America, the domestic terrorist group you’ve probably never heard of. They believe that Roe V Wade is ‘terrorism in the womb’ and have taken it upon themselves to be judge, jury and executioner, all while being the moral compass of America (hold my bag while I fan myself, I believe I have a case of the righteousness sweats). They will do everything in their power to stand between you and your rights. Operation Save America, the ISIS of the uterus.

Operation Save America (OSA) hosted a delightful get together, Summer of Justice, last week in Wichita. The event was to commemorate the 25th anniversary of the Summer of Mercy, an anti-abortion spectacular (spectacularly redic, hateful and terrifying). Summer of Justice (we’re so glad they changed the name from Mercy to Justice to better fit the patriotic rhetoric of our times, rarely does one get a misogynistic hate tweet without it coming from an avi of a flag) is basically to rail against women’s reproductive rights and gay people. (And me without my pearls, why wasn’t I at this party?!)

At the Summer of Justice event it was decided that laws in the United States that violate OSA’s perverse reading of Bible aren’t real laws and no one needs to pay attention to them. Oh thank goodness!! I’m so glad you let us know that certain rights and rules are negotiable because a group of men who have yet to evolve (how lucky for them that they don’t believe in evolution) out of the primordial ooze said so.

Of course the laws OSA has decided are null and void are those particular to protecting abortion rights, you know because Jesus was super specific about that (good luck finding that quote) and laws about gay people. They don’t seem upset about not wearing a mixed cotton blend (which I do believe I recall reading in my Bible summer camp) or not judging people, which was one of the more direct quotes from Jesus if my memory serves. But I guess pick and choose for your own benefit OSA, who am I to point out the holes while you are busy insurging into my vagina.

And which version of the bible are we talking about? Just so I’m clear about what rules don’t apply. The original Greek version that had no punctuation and then has been translated 1000s of times since? Just curious. Am I killing my first born or not? I mean if you are going to drag me into this whole Church and State consummation please know your Church. I want to be specific about the terrorism you are fighting against my will inside my womb.

Rusty Lee Thomas (a personal favorite insane person of mine), director of OSA, leader in Summer of Justice festivities and Reverend at his own hate “church” Elijah Ministries, said “We cancel these wicked decisions. We render them null and void. We prohibit their enforcement upon America and its citizens. We declare with one voice that these wicked decrees are no longer binding upon us, our children or our nation.” Good for you buddy! You prohibit, declare and render. Those are some big britches, big boy. How great for you that you know what’s right for everyone else and just want to violently bypass LAW AND ORDER AND HUMAN RIGHTS. My vagina thinks you should be in jail.

Rusty Lee closed out the Summer of Justice event by saying “You’re literally acting today like a Moses to Pharaoh” by “telling our government what you are doing is not lawful in the eyes of God.”

Stop, my stomach hurts! I’m not sure if it’s from laughing so hard at Rusty Lee’s use of the word ‘literally' or because I am so terrified. “These laws don’t apply to us”, uh, HELLO WATCH LIST!

I came up with some alternative names for their event next year: Summer of Hate, Summer of Human Rights Violations, Summer of Hypocrisy, Summer of Sam (oh, that one’s taken).