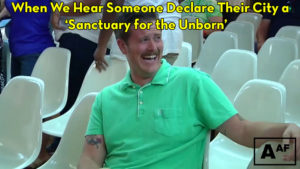 One of the news stories we covered today was about yet another town trying to make a symbolic and utterly ridiculous resolution to call itself pro-life.  Last month, an all-male council in Waskom, TX declared itself a ‘sanctuary city for the unborn’ only to be followed by a city to Waskom’s north, Mineral Springs.  Riverton City, UT and even Roswell, NM did the same thing and many more have tried.

Aside from being offensive to actual sanctuary cities which protect immigrants in our country (actual lives), these ‘pro-life’ measures are just more wastes of time and money so a bunch of white dudes can puff out their chests and act like they’re doing something important.  What do they expect by these proclamations? That fetuses that would otherwise be aborted will now suddenly hop out of the womb and thumb it to Waskom? I know, they’ll all smuggle themselves into luggage to spend their remaining incubation in Utah?

Here’s the thing.  Abortion is still legal.  There is absolutely nothing they can do to stop abortions least of all these blindingly unconstitutional declarations.  So tell your city council that instead of wasting their ten hours a month on this, pave some roads, declare taco day or better yet, declare ‘Respect a women’s decision’ day.  Every day.

How long have people been having abortions? For. E

FETUS FUNERALS ARE BACK! Indiana's abortion ban is

Hey! Guess what! There’s still time to get in on

Well, well, well! It looks like voting to protect