SCOTUS, Can You Hear Us??

When faced with any big decision, people usually prefer to consult the experts: their doctor, their parents; someone who has lived the experience before or has a vast amount of knowledge on the subject at hand. The Supreme Court of the United States (SCOTUS) is no different. When they’re gearing up for oral arguments on a case before them, they accept amicus briefs, which are submissions by third parties who are not named in the case but offer information on which the case bears… kind of like a favorite, a retweet, and a thumbs-up emoji all rolled into one fancy legal document.

This week, an impressive and diverse group of organizations and individuals submitted 45 amicus briefs to SCOTUS in support of Whole Woman's Health in their case against the State of Texas over HB2, a harmful law that threatens to shut down most clinics in the state, leaving hundreds of thousands of Texans without access to affordable abortion services. Not only would HB2 force folks in Texas to travel out of state for their procedure, putting a strain on abortion providers nationally, but it would also essentially create a template for republican-controlled state legislatures (ie. the majority of state legislatures in the country) to do the exact same thing in their state, like a giant anti-choice domino effect.

We at LPJL would like to offer a big THANK YOU to all of those who submitted amicus briefs on behalf of our lady parts. That group includes, but is not limited to:

For a full list of these wonderful groupies for choice, click here. And if you feel so inclined, send them a thank-you tweet in between checking your mentions and blocking trolls.

Oral arguments for this case will take place in early March and the decision should come down in June. Stay in the loop with LPJL as we bring you updates on the case and ways you can support the cause! 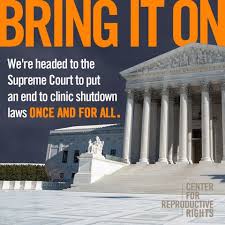 We support our besties, The Center for Reproductive Rights <3