Snake in the Bluegrass 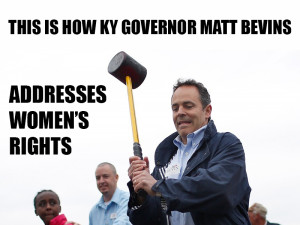 The new governor of Kentucky, Tea Party darling Matt Bevin, is already working hard to keep the state at the forefront of the race backwards in abortion rights.

In an unprecedented move, Bevin signed an anti-abortion bill into law the moment that state lawmakers delivered it to his office in the state Capitol.

The bill adds yet another layer to the bureaucratic red tape that women in Kentucky are forced to fight their way through to exercise their Constitutional rights. Doctors must now misinform women about the risks of abortion in person at least 24 hours beforehand. Anti-abortion crusaders were upset that some doctors–who were evidently uncomfortable mouthing inaccurate propaganda–were informing patients with a recorded phone message.

It’s the first time that Kentucky lawmakers remember a bill being signed immediately upon delivery.

For those who prefer to celebrate the stripping away of reproductive rights, a ceremonial bill signing will be held at a Right to Life rally at the state capitol on February 11th. Bevin said the ceremony would provide “…the proper amount of pomp, circumstance and flourish.” Don’t forget to bring party hats and noisemakers.

The state of Kentucky can have a cultured sort of mint-julep image, but Kentucky Woman Hater  Bevin seems determined to keep the state mired in a reputation for moonshine, meth labs, morbid obesity, and backward thinking. Do you expect anything less from the home of the Creation Museum and forced beard eating?
It seems that Matt Bevin, a noted supporter of cockfighting rights, is much less generous when it comes to the rights of people who don’t have cocks.