Sodomy? You Barely Know Me! 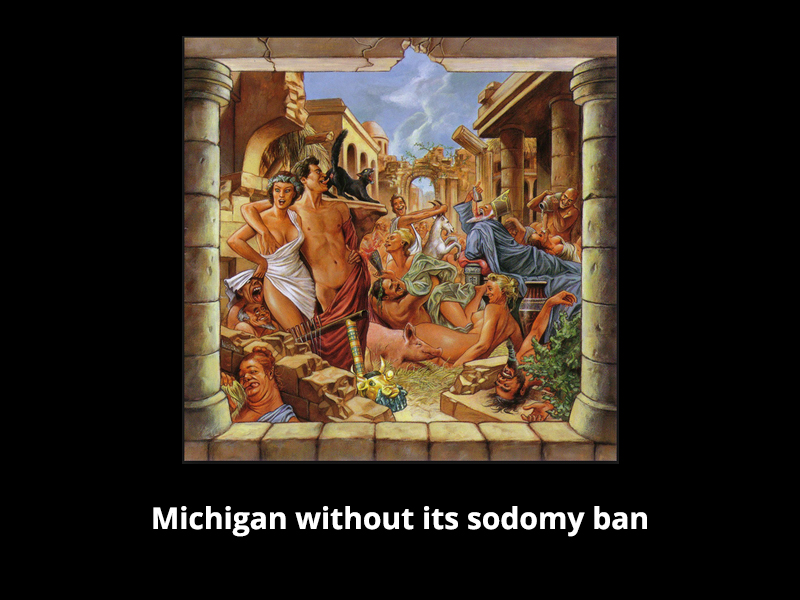 For a state shaped like a fist, Michigan is pretty squeamish about sex.

Michigan is one of a dozen states that still has a sodomy ban on the books, despite a 2003 Supreme Court ruling that made such laws unconstitutional. Many of those states’ laws solely target gay sex, but Michigan makes sodomy a crime for anyone–which is kind of admirable in a weird way.

The Michigan law also lumps sodomy in with bestiality, making it a felony to engage in “…the abominable and detestable crime against nature with mankind or with any animal.” It kind of sounds like the Michigan sodomy law was written by the same person who wrote Leviticus.

Oh, and the punishment can be life in prison if the offender is a “sexually delinquent person.” So at the very least,  do be prompt with your sodomizing.

No, Michigan wasn’t suddenly seized by a sodomy surge–in case you have a Google alert for that. Michigan Senator Rick Jones was updating the law to ban convicted animal abusers from owning pets, and he realized that any attempt to delete the now unconstitutional sodomy part would only cause problems: “I would rather not even bring up the topic, because I know what would happen. You’d get both sides screaming and you end up with a big fight that’s not needed because it’s unconstitutional.” In other words, a lot of Michigan legislators are afraid to have a vote on record to decriminalize oral and anal sex. Well, it’s no good if people are uptight, anyway.

So the Michigan State Senate has kept Michiganders safe from the “sins of Sodom.” Now that this important issue has been addressed, maybe they can arrange for Flint to get some safe drinking water…