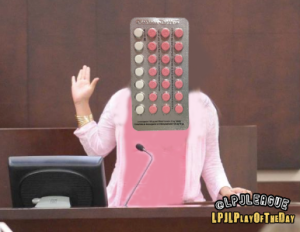 Birth Control is back on trial, sweating in the witness stand while people cry religious freedom. The Supreme court is set to hear more than a half dozen cases from employers seeking to not cover their employees' birth control (they probably are covering Viagra though – just a guess). These cases are being lumped together under the name Zubik V Burwell.

Thanks to Citizens United, corporations are now people and actual people are fucked. Then Hobby Lobby took it one shit staining step further by claiming that their corporation was religious and shouldn’t have to cover birth control for their employees. Which opened the floodgates for all these corporations to come forward with their “person card” claiming that they are religious.

Basically what came down the poop pipe after that was that if you – “you” being a corporation – decided not to cover birth control, you would fill out a form saying you weren’t covering birth control and then employees who needed it could find other ways to get it covered.

The people in Zubik V Burwell are arguing that even filling out the form is violating their religious freedom. COME ON YOU CAN'T FILL OUT A FUCKING FORM YOU FUCKBAGS? What an incredible waste of every taxpayer's money and time!

So if you work at one of these companies, not only do they not want to cover your birth control, they want no one to cover it for you. You just can't have it, because they say so. It hurts their religious feelings to have you walking in the door knowing you have birth control. Their religious freedom is completely overriding yours.

Heaven help you if you have fibroids. Literally.