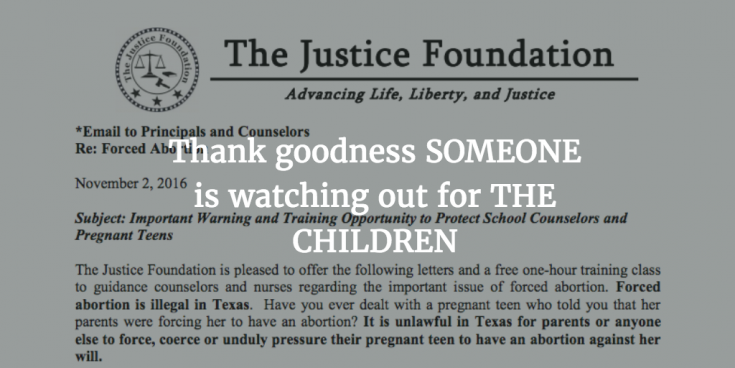 Texas schools have been on the receiving end of some unsolicited, unhelpful parenting advice from Allan Parker, President of the (dubiously-named) Justice Foundation.  Described as “a local lawyer who’s been diligently working over a decade to overturn Roe v. Wade,” Parker is obviously a super fun, not-at-all reptilian human trying to protect teen girls in his state from a thing that rarely ever happens: Forced Abortions.

According to the San Antonio Current, dude’s been sending the same baseless, tin-foil hatter literature to every Texas school district for a while now attempting to remind them that “parents are not allowed to force their child to have an abortion if their child is against it.” He talks about this as though it was nearly as big of an issue as young women being unable to access a legal procedure they want.

Also noted in the Current, is his complete failure to back up any of his claims that these sort of incidents happen on the reg. (Most likely because there’s already laws protecting young women who wish to remain pregnant.)

“There is no real data on this issue,” Parker told the Current, before arguing that people just aren’t talking about this not-an-issue issue enough.

“It's the law, right,” he told The Current, “But we're the first people telling them about it and talking about it.”

Now, Parker claims that his regularly issued unsolicited letters have “stopped 95 percent of forced abortion cases” — seemingly conjuring that number out of the deepest crevices of his ass, though we can’t confirm as of writing.

Again, per the Current, “Parker's work as a lawyer has been questioned in the past by at least one federal judge, who called him incompetent for filing ‘highly prejudicial and legally irrelevant’ documents in court.” Meanwhile, The Justice Foundation he presides over is responsible for directing school counselors to (noted distributors of anti-choice garbage) Crisis Pregnancy Centers.

He also argued that teenage girls with parents who want to force them to carry their pregnancies to term  “have it easier” — despite the anguish of losing control of her body, the difficulty of Texas’ parent consent laws or even attempting to gain judicial bypass by proving she’s mature enough to understand her decision.

This is just another example of a common anti-choice tactic: Focusing on irrelevant non-problems like “forced abortions,” the supposed state of the souls of medical waste or the width of a clinic’s hallways are all means of creating additional problems for providers and activists to solve and, of course, to chip away their access to essential healthcare.