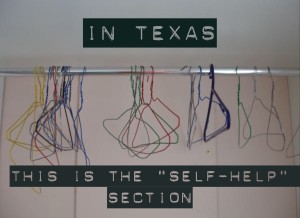 The massive sinkhole of women’s rights that is Texas continues to suck lives into its gaping maw. According to a new study, at least 100,000 and as many as 240,000 Texas women have attempted self-induced abortions. And–Surprise!–the sudden spike in the number of desperation abortions is related to the increase in desperate Texas women who have been denied abortion services under the state’s harsh restrictions. Over half of the abortion clinics in Texas have been forced to close, and the result is the rise of a grim “Do-It-Yourself” movement.

Passing laws against something makes it disappear–we learned that from Prohibition, right?  No–outlawing abortion doesn’t reduce the number of abortions, it only increases the number of outlaws. And now, thanks to the shortsightedness of Texas politicians, the state of Texas now teems with almost a quarter million new outlaws–all of them women. And next it may well drive a shortage of coat hangers.