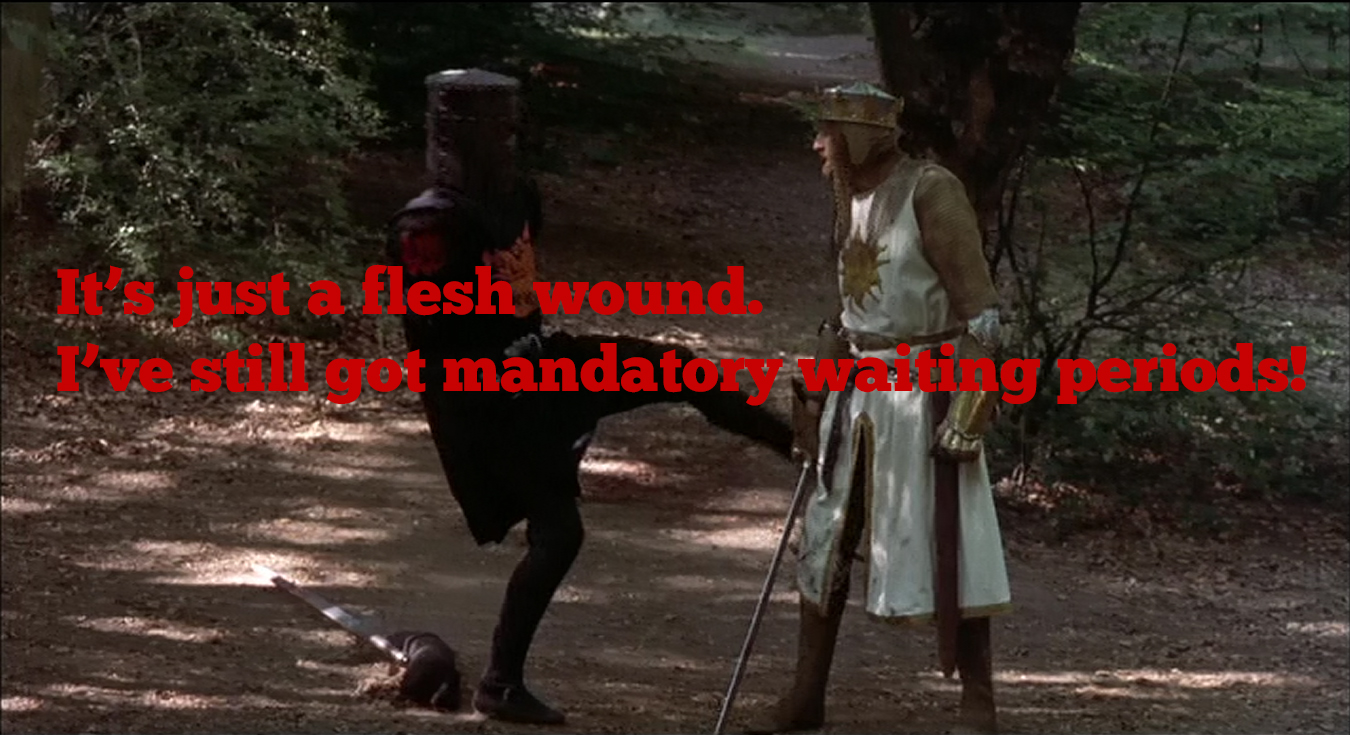 It ain’t over ‘til it’s over. And with these people, it ain’t ever over.

Make no mistake–Whole Woman’s Health vs Hellerstedt is a great victory. The money you spent toasting the decision with those red, white, and blue layered margaritas over the 4th of July weekend was well spent.

Hellerstedt significantly alters the playing field, but it doesn’t end the fight. The other side isn’t exactly conceding. They’re motivated by the same dead-ender obsession that makes county clerks in remote mountain hollows refuse to issue gay marriage licenses for months after the Supreme Court ruled on that. The same misplaced tenacity that kept lone Japanese soldiers holed up in the Philippine jungles for decades after the war. The same nutty intransigence that drove Monty Python’s Black Knight.

In a piece for Bloomberg, Harvard constitutional law professor Noah Feldman has put together a handy overview of where we stand in terms of state abortion restrictions. TRAP laws in other states that are similar to the Texas provisions that the Court struck down will undoubtedly fall. But many states will prop them up for as long as legalistic douchebaggery will allow. Those laws deal mainly with requirements for surgical ambulatory care facilities and requiring admitting privileges to local hospitals.

But anti-abortion laws are like malignant viruses–innumerable and varied. There’s no one quick judicial cure for all of them. And they’re constantly mutating into different forms that are resistant to legal antibiotics.

It’s not clear if the recent Supreme Court ruling will have any impact on the shit-sack full of laws about mandatory waiting periods, burial for fetal tissue, forced ultrasounds, and countless other dirty uterus tricks employed by anti-abortion forces. What is clear is that most of anti-choice loons who propose and pass these laws are STILL IN OFFICE and have vowed to fight tooth and nail to defend those laws, even as they’re dreaming up new ones to take their place.

We’ve got to be that tenacious, without being that crazy.