The Fast & the Spurious: The Anti-Planned Parenthood Movie Franchise is Out With Yet Another Unwanted Sequel 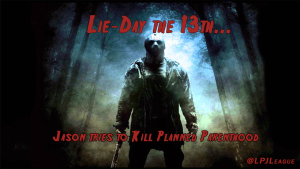 Don’t you hate it when a movie franchise doesn’t know when to give it up? The Center for Medical Progress, the “people” who brought you “Vicious Lies About Planned Parenthood” “Parts” 1 through 9 are out with their 10th video in the poorly received series.

Hello! We’ve seen enough of these awful films to realize that they are poorly edited crap-taculars designed for a dumb and unquestioning audience. Enough already! This is like the endless “Friday the 13th” parade of sequels, except that the stories they’re trying to spin about Planned Parenthood are even less believable.