The Gall of Troy 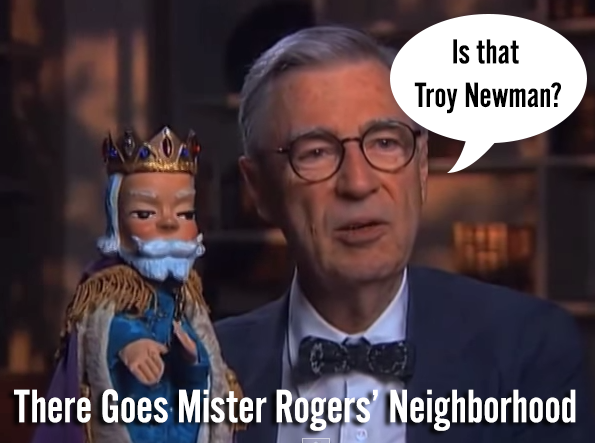 Thanks to the Hyde Amendment, none of your federal tax dollars can go to providing abortion services to women who desperately need them. But it seems that your tax dollars CAN go through the Corporation for Public Broadcasting to an anti-choice zealot neck-deep in the flood of violence that is surging over abortion clinics all over the country. And it’s all being facilitated by the good folks at Public Broadcasting, of all places.
That’s right–the people who gave you the gang at Sesame Street (before they gave them to HBO) and the highbrow fare of Downton Abbey are having a violent anti-abortion extremist host a televised town hall. It’s a good thing Big Bird and Elmo got away from PBS before this travesty took place. It’s enough to knock the smile off of Mister Rogers’ face.

PBS is airing a documentary examining the relationship between guns and faith in America called “The Armor of Light” on May 10th. A town hall that will accompany the doc features none other than Troy Newman, one of the most virulent and violence-espousing abortion opponents there is. This, despite the fact that Newman only appears in one quick scene in “The Armor of Light.”

Troy Newman has made a career out of harassing abortion clinics and patients. He’s the head of Operation Rescue which routinely spews violent hate speech against abortion providers. Worse, the organization is associated with many who have perpetrated violent attacks on clinics and providers, including the murder of Dr. George Tiller.  Troy advocates harassing clinic workers so that “they can’t live a normal life.” His harassment got him deported from Australia, but the folks at PBS seem to have no problem allowing him to share the legacy of Sesame Street and Mister Rogers.
Viewers like you should be appalled.