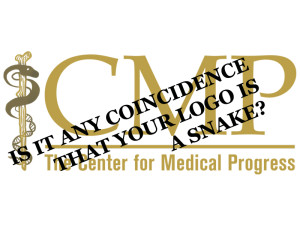 A federal judge in San Francisco has told the The Center For Medical Progress, that gang of grifters behind the fraudulent videos of Planned Parenthood, that they have to stop lying — which you can imagine is a crippling blow to an organization founded on lying.

The so-called “Center for Medical Progress” has nothing to do with medical practice… unless you count doctoring videos, that is. And now a new preliminary injunction prohibits them from even doing that. Bummer for them. Now they can’t pretend to be doctors OR journalists… what’s a professional fraud to do?.

It’s not the first time that these anti-abortion shamsters have run afoul of the law. Two leaders of the organization have been indicted by a grand jury for tampering with government records–a felony–and for attempting to buy human organs.

Now US District Court Judge William H. Orrick has told the faux newspeople that they can’t defend their use of fraudulent documents by pretending to be journalists doing an “undercover investigation.” The message is that you can’t conduct a campaign of intentional slander and lies under the guise of being a news organization… Fox News notwithstanding.

The judge noted that nothing in the group’s hundreds of hours of footage indicated in any way that abortion providers had broken the law. Now somebody needs to tell the rightwing noise machine.

What are anti-abortion zealots going to do now that their favorite fake movie franchise has been prohibited from releasing a new installment? They’ll have to do what Carly Fiorina does and just totally make up fake anti-abortion videos in their heads.