The Handmaid Experience On the Road

This Garbage Fyre Festival we were joined by the Texas Handmaid’s. The group does actions at statehouses and businesses that accept anti-abortion money! They decided to counter the anti-abortion protesters by standing in their robes in silence around the action. It definitely worked, partially because they did not get the reference and thought we were a bunch of witches…?? Which, sure! Our own May S. was there on the ground too and decided to join in on the action! Here she writes about her experience: 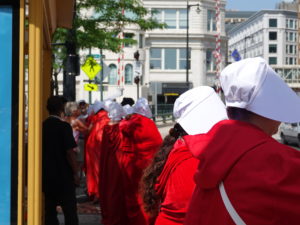 The whole experience is wild. The plan was to walk out, stand in front of their signage and then silently wait for an hour. Two by two we went over the bridge, heads bowed, eyes on the feet peeking out from under the robe in front, and into the anti-swamp littered with their disgusting/fake fetus photos in the square. With your eyes constantly on the ground, it's difficult to capture the entire scene. It wasn't until viewing photos and talking to people that I really got a grasp of how chaotic everything was. The only portrait you get of the world around you is through the sounds of anti-choicers “preaching” about Jesus and what the Bible views as the “ideal woman” and the strong shouts of my friends and co-workers drowning out their garbage, and feet shuffling by as you hope to catch a familiar voice or a shadow to know that there's someone you trust nearby.

At one point this anti-abortion protester came over to harass all of the handmaids individually, accusing us of being witches and speaking in tongues. She called us racists, she spewed ageist garbage at the older woman next to me, and at one point she put her face under my bowed bonnet and into mine. I looked at her in the eyes for a moment while she continued on her deluded tirade and eventually, when she realized I wasn't going to respond, left me alone and opted to pick on, as well as physically attack, the woman with a walker to my left. She was pulled away by the police after that, so that they could experience what a delight she was, but despite their presence she came back to yell at us some more before getting on the PA system herself to share her joy with the rest of Milwaukee. It would have been selfish for us to keep it to ourselves, right?

We were told the last thing the Handmaids would do together would be a “shaming” where we all find an anti to single out and point at them with one finger wordlessly. In a happy coincidence, our new friend was still on the microphone and she challenged us to make something levitate, and said she wasn't scared of our “witchiness”.

I was told later that we looked really creepy and I was very pleased to hear that. Mission Accomplished. 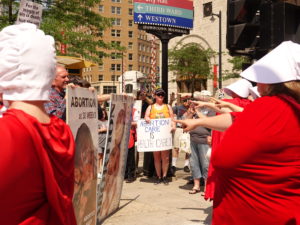 🚨WHAT THE FUCK🚨Whistleblower reveals Kentuck

Iowa politicians file a bill that bill would make