The Helms Amendment: Supporting Terrorist Attacks on Women’s Bodies since 1973 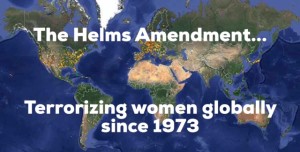 What is it: The 1973 Helms Amendment states that “No foreign assistance funds may be used to pay for the performance of abortion as a method of family planning.”

What it means: United States law prohibits us from giving money that could help women get an abortion after being raped in a war zone. I MEAN COME ON PEOPLE. Women being systematically raped as an act of war is probably one of the most foul, disgusting, disturbing, inhumane, cruel things I can think of. This practice has been going on for centuries and now extremist groups like ISIS and Boko Haram seem to be making it a cornerstone of their deplorable practices. Now WE have a hand in forcing these women to move forward with pregnancies resulting from rape (children resulting from these pregnancies are often shunned, by the way) by saying ‘Oh sorry — we can’t help‘?! Shut the front door. SHUT IT FOR REAL.

What people are saying about Helms: In August, after President Obama visited Kenya and Ethiopia, Democratic Reps. Jan Schakowsky of Illinois and Eliot L. Engel of New York (joined by about 79 other house Dems) wrote a letter asking the prez to ditch the overly strict interpretation of the amendment and tell foreign-aid agencies that Helms would permit abortions in cases of rape, incest and when the woman’s life is at stake.

Hillary Clinton also recently addressed the amendment at an Iowa Town Hall meeting when she was asked about the fact that since ISIS uses “rape as a weapon of war… what is your position on Helms as it relates to public funding for abortion?” Clinton, who has a strong record of supporting women’s reproductive freedoms, said “I do think we have to take a look at this for conflict zones … And if the United States government, because of very strong feelings against it, maintains our prohibition, then we are going to have to work through non-profit groups and work with other counties to…provide the support and medical care that a lot of these women need.”

Reinterpreting Helms: I don’t know, I’m not a lawyer, but I did go to school with a bunch of them and even dated a few… Maybe the way to interpret Helms is we all agree that DEALING WITH THE HORRORS OF RAPE IS NOT ‘A METHOD OF FAMILY PLANNING.’ Just an idea. How about not allowing women’s bodies to continue to be a field in which we wage wars. We simply cannot stand by and let this continue.

I’m going to assume that anyone who agrees with the Helms Amendment (with respect to rape in war zones) supports ISIS. I mean WTF?! We can send in a drone but we can’t help women who’ve been forcibly impregnated by enemies?! GIVE ME A FUCKING BREAK. Put on your flag pin and fix that amendment ASAP.

To Find out more about ending the Helms Amendment visit: Helms Hurts