The Political is Personal 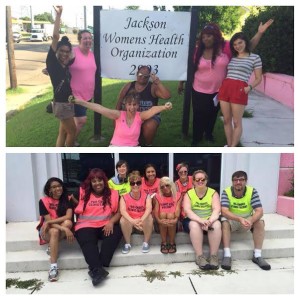 Some people are super hellbent on doing that for some reason. Every week there’s a new story about closing clinics, defunding Planned Parenthood, outlawing everything. I think they find repealing women’s rights fun. These people need a new hobby! Maybe they can pick up some hate crafts at Hobby Lobby.

We talk about these issues all the time. Sometimes in a pretty broad sense. But as we all know, the political is personal. More so than ever for us here at LPJL. Our friends at the Jackson Women’s Health Organization (JWHO) are under attack. Which, sadly, is nothing new. We visited them this summer during our #MobileJusticeUnit road trip (and fell in love with them!). The doctors, workers, clinic escorts & defenders work tirelessly to protect a space that the community direly needs. These people are courageous and selfless. There’s a case that is pending against this clinic, attempting to restrict or completely eliminate abortion access to the population they serve. JWHO is the ONLY abortion provider in the entire state of Mississippi. A little reminder in case it’s been a while since you took a geography class—Mississippi is no tiny state. But they aren’t the only ones under attack. The same goes for our pals at Whole Women’s Health, who we helped raise funds for back in 2013.

The laws the anti-choice folks are trying to put through are under the guise of “protecting women’s health.” Lots of loopholes involving things like doctors needing admitting privileges to hospitals, despite the fact that they’re working out of clinics.

The Supreme Court is considering whether or not they’ll hear these cases. Let’s hope they have better things to do with their time. Things besides hate crafts.